The level of stupid we're at: "This is a picture of coal miners, but

it reminds me of blackface, therefore is offensive, and should be removed if you care about People of Colour!"

No, I'm not kidding:

For me, the coal miners disappeared and a film honored for its artistic merit, despite being the most racist propaganda films ever, D.W. Griffith’s “Birth of a Nation” (1915) surfaces, in which white actors appeared in blackface. The white owner saw coal miners in the photograph. Therefore, it was not offensive.

Fact: The photograph shows coal miners’ faces covered in soot. The context of the photograph is not the issue.
'The facts do not matter, my feelings do!"  Definitely a Occasional-Cortex voter here.

This is his idea of 'offensive blackface' 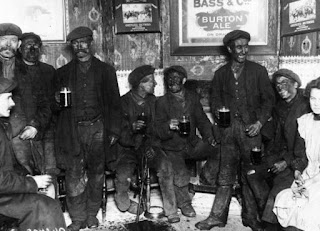 Know what I'm offended by?  Assholes who look for offense in everything.  Because they'll always be offended, and demand everyone else change everything to accommodate them.

I look at this article an see a "man" who has never held a dirty job in his life. I use the words man and his very loosely.

To restate his closing line: I think we should sacrifice butt-hurt whiny little bitches like him for the greater good.

Am I the only one who's surprised that the writer didn't get his knickers in a twist over the BLATANT promotion of 'White Racist Christianity' by the guy just left of center in the photo?

Yeah, you can 'claim' it's just a reflection off his beer mug, but all 'I' see is a coded reference to burning KKK crosses!

And it's a DARK beer too!