"Laws are for the peasants to obey, not us."

John Holdren, director of the White House Office of Science and Technology Policy (OSTP) and President Barack Obama’s chief science adviser, is refusing to allow emails from one of his private accounts to be made public, even though a federal court has ordered him to do so.
Makes you wonder just what he's worried about hiding, does it not?


Remember when leftists actually cared about freedom of speech and such?

Speaking of,
A left-wing group that is planning a massive protest on Inauguration Day openly admitted during a press conference Thursday that their intention is to prevent the peaceful transition of power. The group, #DisruptJ20, held the press conference to proudly announce their plans to obstruct the presidential inauguration of Donald Trump on January 20.
Response: 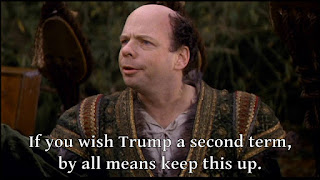