Some thoughts on riflery practice

from this gentleman; other interesting things on his site, too.


The families of a bunch of fallen SEALs expressed their opinions; and if they're right about this imam, he needs his ass kicked.  And the idiot who invited him needs twice as much.


Well, he was flying with The Lightbringer, you'd expect him to be polite to a lesser mortal?
But it didn’t happen. President Obama had nothing to say to the moonwalker and didn’t seem to want to hear anything from Aldrin on the long flight to Florida.  So Aldrin sat in the back of Air Force One and never saw Obama – until it landed.

When it landed, Aldrin said he was summoned to the front of the plane. But he found out it was not to talk about space policy.  Instead, President Obama wanted Aldrin to emerge from Air Force One next to Obama for a photo op.  The moonwalker was to be a mere prop. 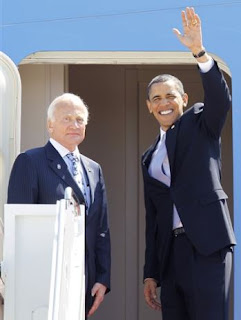 Aldrin looks just effing thrilled to be there, doesn't he?
Posted by Firehand at 19:03

I want to comment about how badly he treated Buzz but I simply cannot make myself go that low.

The dark cloud in my mind will not release any coherent thoughts.

obama is insulting and dispicable.

But you knew that already, didn't you?

Seeing Buzz Aldrin give the same sort of knuckle sandwich he delivered to a loudmouth moon landing conspirator to Teh Ø would have put him over the top from Legendary to Mythical.