Maintenance and parts and tires,

Oh crap. Remember I mentioned being tired and a bit under the weather? Well,
It came to my attention a couple of weeks ago that I really needed to put new tires on the bike. Both from the center tread being, well, gone, and from the date codes indicating the things were going on six years old. Yeek. So various questions were asked, research done, tires decided on and who had the best price, and I ordered them; turns out that, these being a popular size, it would be first week of February- probably- before they came in. No problem; these still had some life in them, and right now not riding much. And this way they’d be very recent production*.

This led to two other things: One, I had a set of Speedbleeder valves to put on the calipers, and it’d be easier to do that with the wheels off. Second, how to get the front end up for removing the wheel.

If you’re not familiar with this aspect of motorcycles, if you ride your bike in and drop it off to have new rubber put on, they charge you ‘X’ for the front wheel and ‘X’ for the rear to take them off and put them on; just bring in the wheels, it’s just mounting and balancing**.  A few days after ordering came a call, the dealer had managed to find both tires and they were in, so had to pull the wheels.

The rear is no problem: put the bike on the centerstand, use a cargo strap on the wheel, pull the lug nuts and off it comes(another reason I love this single-side swingarm). The strap idea came from son: to keep the wheel from turning while you loosen/tighten the nuts, hook the strap to the frame on one side, through the wheel and to the frame on the other side, tighten appropriately; when you put torque on the nuts, the strap keeps the wheel from turning. But the front wheel is on the floor, so you have to raise it. There are stands for the purpose, you can use a wood block and a jack either on the headers or on the bottom of the engine, but another use for the strap came up: 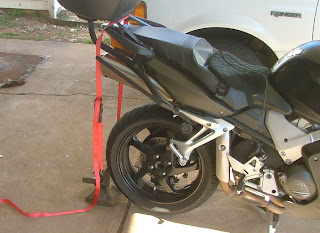 suitable weight, loop it from weight over the back end, tighten to raise. Which worked. Once the wheel was off, put the axle back through the forks and set it on a jack.  So got the wheels off(all went well), and dropped off. I figured leave the valves and such until had the wheels back, as can’t bleed the lines until the wheels are back on. Plus it was chilly, and that under-the-weather thing indicated warmer temps would be nice. Next day picked up the wheels, and that afternoon decided “Well, if I wear a jacket, with the wind down, it’ll be fine.”
Bullshit.
So installed valves, installed wheels(if you get a bike, and plan on doing your own maintenance as possible, if you don’t have one get a good torque wrench), bled lines. Then considered taking a ride to try the new rubber, but decided against, as it was cooling back off from not-warm to start with and I was starting to drag. Which got worse as evening progressed; I really should have waited for a warmer day. So I can’t give an opinion on the tires yet, but I can tell you the Speedbleeder valves are great; they make bleeding the brake(and clutch) lines easy.


*There's a code on tires that tells you when the things were made.  Over the years I've known a couple of guys who bought tires, and then found out the things were a year old by the time they bought them; not a good thing.

**Yes, I've changed tires on motorcycles before; smaller tires on steel wheels.  Unless I have no choice I'd rather pay someone with the tools to do that on something this size, let alone on alloy wheels.
Posted by Firehand at 17:21

I stopped changing my own tires after I butchered the wheels on my 86 FZ600. Now I do what you do. Take them off and drop them off at the shop. I just can't save enough money to go through that tire iron torture anymore.

$ saved and probably more convenient all around for you and the bike store.

I had a 99 for about 8 months.
I fixed the little bit of road rash ,and repainted it a
chamelion color called tahitian sunrise.
I had some left over from a Harley I painted.
sold it to the first person that looked at it .

The last motorcycle I changed tires on was smaller, and had steel wheels, and it was a pain. I took one look at the cast wheels on the Vulcan I used to have and said "NO." Same here. Found several threads at the VFR forum about how to DIY, but only if I have no other choice.

I've had this VFR for going-on three years; not quite as comfortable on long-rides as the Vulcan was, but much better than a sport bike. And I love the way it moves.

Son's working on a bike now, he found a powder you can add to paint that glows in the dark; plans to use it in appropriate places. I want to see how it turns out.

Great post! Thanks for sharing some of your tips to us, these might be helpful to me someday.