and whether it's from doing, from not enough sleep or the weather changing, I ache from roughly mid-back to my feet. And since I haven't caught anyone sneaking around hitting me with a stick, has to be one of the above. 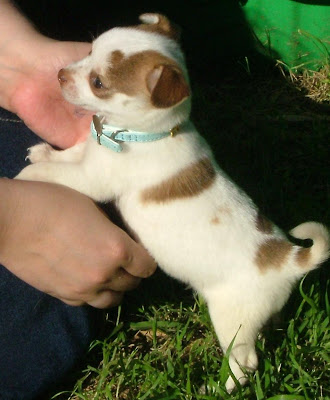 is doing well. Just slightly bigger than before, but now starting to eat softened dry food, actually playing with Itzl the long-hair chihuahua and generally acting like a 5-6 week puppy. I tried to get one of him and Itzl playing, but couldn't catch them still long enough for my camera to click before they'd move. Sometimes a considerable amount. That's daughter's hands, to give you an idea of size.

I have discovered that if, after scratching his back, I grab him around the body and wobble him a bit, he starts making noises that sound like he's off his meds(maybe a relation to Lawdog's kitten?) I am informed that if rolled on his back and suitably annoyed, he opens his mouth, sticks out his tongue and generally sounds and looks like a stand-in from The Exorcist. Which is kind of disturbing in a critter I can hold in both hands with room to spare.


I mentioned I was going to make a set of smooth walnut grips for the Victory Model, and they're coming along pretty well. I decided to make a set for the Target Masterpiece, too; the originals* just don't fit my hand very well. Here's the progress so far, Target on top: 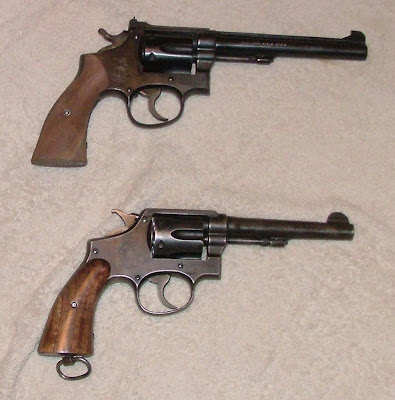 The Victory grips have a couple of coats of my favorite finish**, the Target grips are just as I finished sanding them today.

It's been a fair while since I did a set of these, and they're not fitted as nicely as they should be. Nothing horrible, but definitely not quite right. They lock solidly into place, and fit the hand nicely, so I'll just do a bit of trying and sanding on the Target grips and then finish them, also. What I really need for this is an old Model 10 frame that's cracked and unusable for a firearm, so I can mount the grips on the frame and do a lot of the sanding/scraping without worrying about scratching the metal.

The Paseo Arts Festival is on this weekend in the Paseo District(also known- at least by me- as the Artsy Sector, or the Artsy-Fartsy District when annoyed). Usually a fairly nice fair, but about the time I was thinking of going this evening I heard thunder. It being a holiday weekend WITH a festival, of course Ma Nature has to remind us of her august presence, but why she has to do it by peeing all over us, I don't know; that hardly seems very august.

And the storm is moving northeast to southwest, the reverse of usual direction. Is Ma Nature bipolar?


Ever see Special Unit 2? Was only on for one season. SU2 is a unit of the Chicago PD(why is it always Chicago? Does the Daley presence bring even supernatural dirtbags to the area?) that deals with 'links'; their name for vampires, godlets, scarecrows and other critters of all sorts that show up in the area. Friend, a while back when the Sci-Fi Channel was showing it, taped a bunch of episodes for me(daughter says "That's the job I want!"); last night was watching one, where the male lead has been sentanced to an anger management class. Which led to things like
Pretty Psychologist: "And what happened?"
Cop: "Well, I ran this obnoxious, smelly, disgusting little... troll down the alley-"
PS: "You see, when you call someone names, you dehuminize them, to excuse your violence."
Pause
Cop: "What if he really IS a troll?"
Various discussion, ending with "So I hung him from a lamppost and used him for a speed bag."
PS: "What did you feel when you hit him?"
Cop: thoughtful pause, "A dull thud."

And later,
PS: "Officer, what do you think brought you here?"
Cop: "Honestly?... Witnesses."
Not a bad show, wish I could get the season on DVD.

Speaking of tv, when the Digital Revolution came along, I decided to give it a couple of weeks and see if I missed it enough to buy either a converter box(and I've heard some bad stories about how well they work) or a new tv. So far, the only thing I miss is Big Bang Theory on Mondays, and that's not worth buying the stuff for. Especially since I can just get it on DVD in a few months. I wonder if the networks have any idea how many people just said "Screw it" and gave up the tv for anything other than playing DVDs and tapes? And I wonder what it's costing them in the long run? Or if they really care?

Ok, the weather weenies are currently saying 40% chance of rain through Monday, which basically means "We don't know if it will or not." Considering the aches, I know if I'm going out tonight. Zorba's Mediterranean restaurant has flamenco dancers on Friday night, belly dancers on Saturday, but I'd have to shower to be presentable in company, and tonight it's just not worth it.


*Yes the originals- and on the TM they ARE the originals- are being carefully bagged and stored.
**Minwax Antique Oil Finish. No stain, just a finish that actually soaks into the surface, doesn't just wipe on top. Takes about a week to do the full job with it, but it's hard, protective and brings out the grain nicely.
Posted by Firehand at 17:43

Typically, I go for the bigger dogs that you can wrestle with, but that BABY is BEAUTIFUUUL! And those noises it makes...I bet some of it is from having a full belly. I love the little grunting sounds they make when they're full.

I think I need to get another puppy.