Specifically, their Deer Season 150-grain Extreme Point first.  The people at Wideners were kind enough to say "Would you like to try out some ammo and review it?", and this is one of those I chose.
I wasn't able to set up the Chrony for my own velocity readings, so I'm going with Winchesters, which say 1900 fps at the muzzle with 1202 fp energy.  Test rifle was a AR pattern with a 16" barrel and a Vortex Strike Eagle scope.
First off, no  misfeeds, misfires, problems of any kind.  Only 20 rounds, but still nice.  Second, at 100 yards this was a typical group: 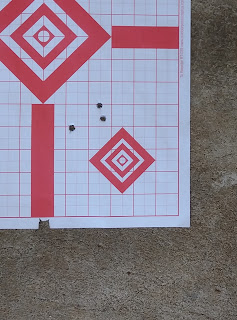 If you can't take a deer with that, you've got problems.  Fix them before you go out.
Was able to take a few shots before the end at 200 yards, which gave this(the blacked-out larger holes we will not speak of, different thing) 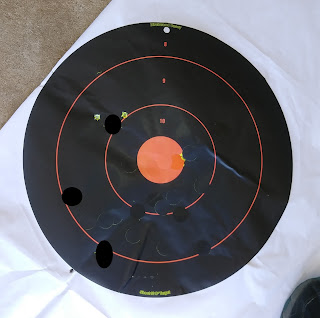 Low on ammo at that time so only one group.  The Strike Eagle has a large ring for close quarters with a center dot, then several stadia lines before that.  The low left just outside the bull was holding the dot on the bull, the other two were using the first stadia line.  200 yards is probably the max for deer with this cartridge, but learn where your sights need to be held and you could do it if you had to.
The other cartridge tried was Winchester 200-grain Open Tip Subsonic Range, which appears to be out of stock currently.  Velocity 1010 at the muzzle, energy shows 499fp.  This was shot through a Silencerco Hybrid suppressor(because it was available, and why not?)  Yes, it was pretty quiet; earplugs only quite comfortable, and being outside could probably have shot without them if nobody else shooting.  Due to the lower velocity had to use the first stadia line at 100 yards: 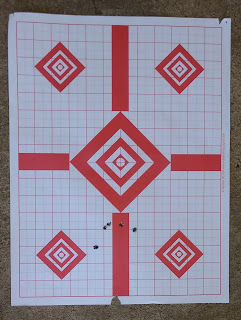 Yes, I spread them a bit horizontally.  Allergies were starting to stuff me up, and that didn't help.  And I did try at 200: 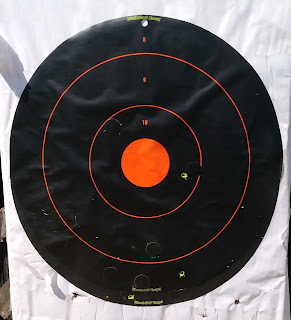 This required the fourth, very bottom stadia line, and these were the last three fired when I found that out.  Considering my eyes at the time, and using that aiming point, I'm not going to gripe.  A better set of eyes would have put them closer together, I think.
And that's the end of my report.  Winchester generally makes good stuff, and this seems to hold true.  Thanks to Widener's, and the ammo(if in stock) should be on this page.  And yes, a little more to try out.
Posted by Firehand at 14:10