From a few days before the current situation, I think I found the load 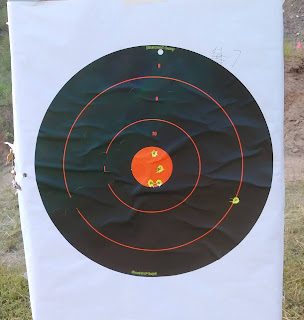 Not a fluke, that's the third group with this load that was this tight or very close to it.  Which for me and iron sights...

This is the Lyman Snover 400-grain bullet, cast of 20-1, over a .060" fiber wad(Walter's Wads, I recommend them), 58.0 grains of Olde Eynesford 1.5f black powder, ignited by a Federal Large Rifle Magnum Match primer, all held together by a Starline case(formed from .45-70) of 2.10" length.  Overall length 2.97".  I found that the max length with this bullet is 2.975 by my caliper, at which point the bullet is engaging the rifling, a PITA to chamber, and does not shoot nearly as well as this. 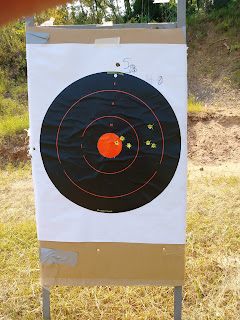 A couple of things before the specifics.  First, I was getting tired and hungry at this point; the tired because between two specific health matters I've lost some endurance.
Second, I've had this two-group crap happen before, and every time it's been my fault.  In this case it was six rounds total, both the sub-groups are just a bit over 2", if you measure them together the horizontal spread is a bit over 4".

With all cases I only resize about the first 3/4" of the case to give enough tension to hold the bullet.  With Starline cases I expand deep enough for the length of bullet that fits inside the case; Winchester cases have thinner walls, and I don't expand them, only bell the case mouth.  Seems to work best that way.

It just hit me that Dad will never get to try these rifles out.  I'm done.

I've been off the net for a few days so I didn't comment on your earlier post, but I'm truly sorry for your loss. That's a tough one.

My dad passed in 2001 and I still have those "damn I wish Dad was here to share this" moments.

Dad will never try them out, but rest assured every time you pull the trigger he is with you, so there is that, Stay Strong.

What Bob said. Keep practicing with them.

Took me about 5 years before I could watch anything !star Wars without my pop. Watching Mandalorian with my 9 year old. The cycle repeats.