There was a terrorist attack on gas lines in Colorado

with some markings left behind indicating Earth First! may have done it.  And for some reason a lot of our Major media has had little to say about it(imagine that).  Well, if they could ignore and then downplay arson, maiming, assaults, looting, some murders, and attempted murder, why would they have a problem downplaying/ignoring this?

Speaking of, this was in Comrade Mayor's NYeffingCity the other day. 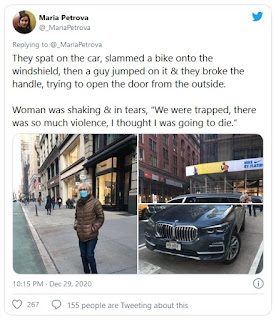 And if these people who thought they were about to die had run over a couple of the assholes while escaping, they'd be in jail.  Because NYeffingCity run by Comrade Mayor.  As Miguel notes As for the places where you can’t carry a gun, just stay the hell out of them.
I'd add "Stay out of places where self-defense is treated as a crime, if you can."