Forgot to add this when it was actually fired, and just ran across the picture.  This is from a box of Sellier & Bellot 124-grain .300 Blackout, FMJ target ammo, that was given to me by the folks at Widener's.  This was fired at 200 yards from a AR15, last group of the day 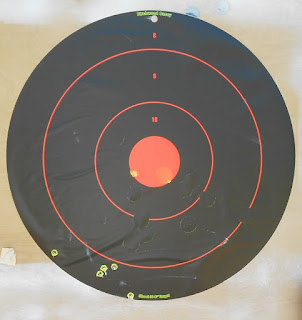 Not bad at all.  Lower POI than with the 110-grain bullets he'd zeroed it with*, and I'm pretty sure I slipped just a fraction on that far-left shot.  I need to get a chance to shoot the rest of the box, and make sure I do it right.

I've still most of the box of Winchester .45-70 300-grain soft-points to shoot as well, but due to a situation, that'll be a while.  So will more testing on some personal stuff of somewhat stiff recoil.