These people are both idiots, and dangerous

This crap showed up on Fecesbook 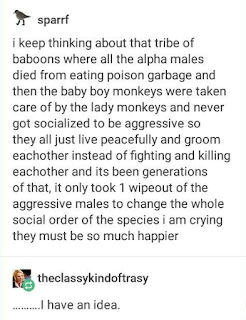 A: Show me ANYTHING indicating that ever happened outside someone's fevered imagination.

B: Know what happens to a troop of baboons if all the alpha males die?  Most of the troop dies, because they're the ones in the front line to defend the troop when the predators approach.

C: Assuming it ever happened, and some of the infant males reach teenage years, what happens?  Millions of years of hard-wired instinct causes them to start acting like males, except here they wouldn't have the teaching of the adult males to make sure they don't screw up.  That's not going to end well.

I'll throw in that this is a fine demonstration of progressive idiocy: instinct doesn't really exist, EVERYTHING is due to being socialized that way, and if you just socialize them 'properly' they can be made more perfect and Society Will Change To Happiness.

That anyone can actually believe this shit is amazing, but they do.  And some of them are like trasy, who seems to like the idea of wiping out adult males so they can properly mold the kids.  Which is one more reason to, if you haven't, take up the practice of arms.


Added: I am informed by someone with experience that the morons involved have no idea what female baboons are like.  But that wouldn't fit the narrative, so they'd ignore it.
Posted by Firehand at 09:37

All that happens when you kill all the alpha males is that the mature offspring of the next troop over's alpha comes in, kills all the boy monkeys, takes over the troop, and impregnates all the females with his own offspring.

And any females that don't go along get killed.

So we really aren't that different from them.

Lady, wiping ofut the snowflakes would be sooo much easier than killing the knuckle draggers. I'd think long and hard before you put that plan into play.

But it didn't actually make them "pacific." By the description in the paper, the males' _patterns_ of aggression changed. It wasn't eliminated. And I have some issues with one of their reference papers that claimed ONLY the garbage eaters in the troop died of tuberculosis, and not a single other member of the troop.

Well if you look at right now, I’d say these cunned stunts have gotten their way. Look at how many of our young men live in mom and dad’s basement. Marriage rates are diving and divorce is sky rocketing as men find themselves married to these man haters, and gladly divest themselves of everything they own in divorce court to be rid of them. And today, the hairless monkeys of the west mindlessly sit grooming each other in their own hermetically sealed stupidity chambers as their country burns down around them.

Tuberculosis? And no others caught it? Yeah, that sounds like BS.

The closest we seem to come to this is in our ghettos. The males are all off in prison, the boys are all raised by single moms on welfare, and they turn into feral street gangbangers. Yeah, that seems to work well. Males raised only by females seem to predominantly become street thugs.

Glen Filthie, what you describe (MGTOW, Men Going Their Own Way) is the twenty-first century version of the Greek play, "Lysistrata", only this time the men are going on strike because of the stupidity of the war the women insist on continuing past all reason and sense.