As a general rule, I don't care who someone dates, or sleeps with

as long as there's no coercion involved.  Turns out I'm a lot more liberal on the matter than an awful lot of the left, part of their insanity being what brought this up:
TERF was initially used as an acronym that meant Trans-Exclusionary Radical Feminist, but the term has always been used to muzzle women from discussing our rights. For the past year and half, TERF has been widely used as homophobic hate speech aimed at all lesbians. That's right... ALL lesbians.

You don't have to be a radical feminist to be labeled a TERF. A lesbian can make it clear she believes trans people deserve human rights and respect, but she's still a "TERF" because her sexual orientation has an innate boundary. That boundary is same-sex attraction for other adult human females. Lesbians are the only sexual orientation that excludes penis...
So: if you're male but you won't date someone who's trans and has a penis, you're homo/trans-phobic.  Or something.  If you're a girl who likes girls, and won't sleep with a trans with a penis, you're a horrible human being.  Reminds me of this I ran across a few years ago: 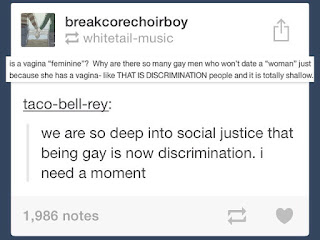 Ever notice that a lot of the left seems to want people to have no choice about who they sleep with?  It's either everyone or you're a hater.