About that crimping experiment,

we had a chance to shoot it today.  Results as follows:
Load used is the 120-grain RCBS bullet over 7.5 grains 2400.  What I've been doing is resizing the first 1/3 of the case, then expanding the case mouth just enough for the bullet heel to enter.  That holds the bullet tightly enough that it won't fall out in transport, or if I pick the cartridge up by the bullet.  Here's an average group at 30 yards 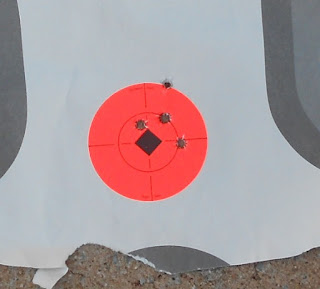 Five rounds, one actually did slightly enlarge a previous hole.

Took five rounds just like this and crimped them. 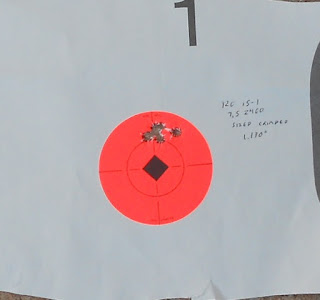 Last is five rounds where I didn't resize, just seated the bullet into the case(they'll damn near fall in), then crimped 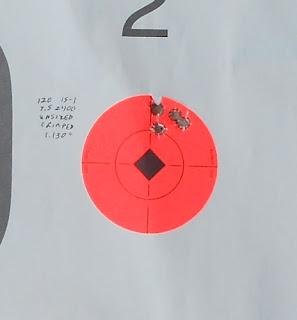 BIG difference with the crimp.

I'm going to have to shoot them again to see if the unsized cases shoot not quite as tightly or if that was me spreading them slightly.  Either way, significant improvement in group size.

Have you tried Rooster Red Lube?

Was recommended in some article I read a long time ago re: 310 Cadet

He was reliably hitting a gong at 600 yards - don't recall how big it was.

Another in the list of "Details Improve the Big Picture".
Would be interested in primer/powder/bullet profile info as well.
Thanks

Haven't tried Rooster on these. So far I've been getting good results(other than not sticking) using the modified Lee Liquid Alox on these.