About half the range report

is brought to you by "I'm still tired, but not hungry".

Big thing today was testing some loads using Blackhorn 209.  This was preceded by a group involving what has been- when it works- the best black-powder load of the 500-grain Lee bullet over 68.0 grains of 2f.  Which was all over the damned paper.  So I went to the first test load, that bullet over 35.0 grains of BH, with a .060 wad, in a Starline case that was prepped the way I've done black-powder cases: no resizing, just expand the case mouth enough to let the bullet seat in easily.

That leaves a slight space between powder and bullet, which the guy at Western assured me is not a problem with full-house loads.  The wad fits the case tightly enough that I could carefully hand-seat the bullet to the selected depth, then crimp the case mouth to it.  Which gave this 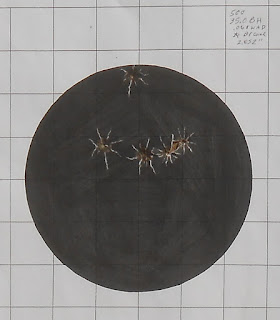 A definite improvement over most of the black groups. 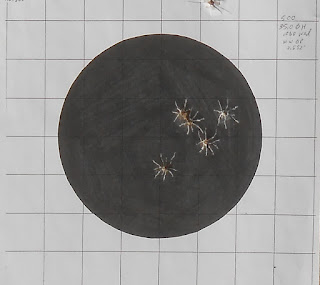 Oh yes.  I can work with this.

Second set used the Lyman 330-grain hollowpoint over the top-end(on their suggested loads) of 44.8 grains, prepped as for smokeless loads(first 1/2" of case resized, then mouth flared), crimped so the case mouth barely covered the last grease groove. 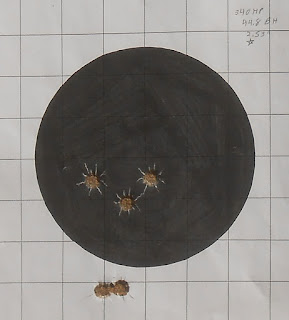 I'm going to try this one again, as I think those two low were probably my fault.

This is the same load in a Winchester case that was black-powder prepped and barely crimped, just enough to hold the bullet and barely fit into the chamber. 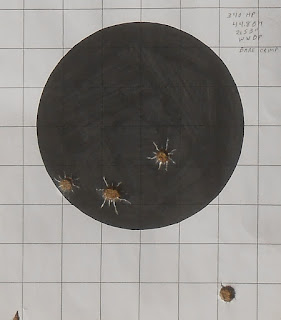 I think this stuff likes a definite crimp much better.  So will need to try this one again with a stronger crimp.

I will note that the recoil impulse of the loads with the 500-grain bullet felt much more like a black load than smokeless, but the 340-grain loads had a much sharper recoil.  I wish I hadn't forgotten the tripod for the Chrony, I'd love to know the velocity on all these.  Ah well, on the retest.


There were some other loads with other powders tested, but that'll have to wait 'till tomorrow.

Second from the bottom, and with the caveat this is based on my smokeless reloading experience, and looking at it from the comfort of my office <yadda yadda yadda...):

I'd say that's your most promising group. Cluster of three tight ones and second group of two touching. That, to me, looks like a happy load that is *just a tad off* in the barrel harmonic/MV mix. I'd explore that one more with a powder trickler and/or crimping and seating die.

Hell, I'm happy with all of these. But you may well be right.

I'm thinking of changing the seating depth a bit, see what that does. That's at the top load listed for that weight bullet by Western(not a 'max' load, just the highest shown), so I'll mess with that first.

Yeah i agree that having a tripod might have made a difference. but good post bro and i must say that you write very well