Britain, look what's become of you.
This arsenal of firearms is among the dozens of weapons that have been taken off London’s streets during the Met’s latest gun amnesty.

Since Monday 45 weapons have been surrendered across the capital as part of the Give Up Your Gun campaign, including shotguns, revolvers, rifles and handguns, Scotland Yard said.
Well, for one thing, apparently all the other 'amnesty' runs, and the laws, and being an island and all hasn't gotten rid of the guns. 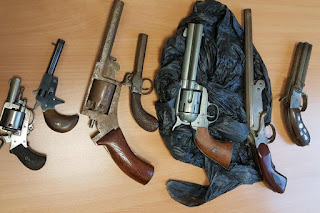 A bunch of antiques, half of them frontloaders and at least one of them inoperable, and a replica.  And they're crowing about the success.

That nation is screwed.