DHS lies and bigotry, and another strike on the Mexican Gun Lie

JustOneMinute has some details on debunked crap the DHS report bases some of the 'warnings' on, including:
At a May 1 bail hearing, ATF agent Adam Nesmith seemed to testify that the government had evidence of the five militia members plotting a machine-gun attack on Mexican immigrants in the nearby town of Remlap. Nesmith described a reconnaissance mission the militia allegedly conducted in Remlap and told the judge, "There was a plan to attack a group of Mexicans in the Remlap area with their machine guns." The judge denied bail, and the alleged backwoods militia machine-gun plot made news across the country. One typical headline the day after the bail hearing read, "Alabamians planned to machine gun Mexicans."

But there is no mention of any specific plan to kill Mexicans in the search warrant affidavits or any other court document related to the Alabama Free Militia defendants, and the ATF says Nesmith's testimony was misconstrued. [ATF regional director] Cavanaugh told the Intelligence Report that Nesmith did not mean to suggest that the defendants plotted to machine-gun Mexicans. What Nesmith meant to convey, Cavanaugh said, is that the militia members were planning to steal machine guns from Mexicans in Remlap — not to shoot the Mexicans with machine guns. "The purpose of the [reconnaissance] trip described by the agent in the testimony was to go to those Latinos and take their machine guns, which the militia believed them to possess," Cavanaugh said.
Yeah, he was 'misconstrued'; which, from an awful lot of these agents seems to mean "He lied to pump up the case, but we're trying to downplay that now." And so on.

On the Mexican Gun Lie, the Daily Mail has this picture of stuff seized in a raid in Mexico: 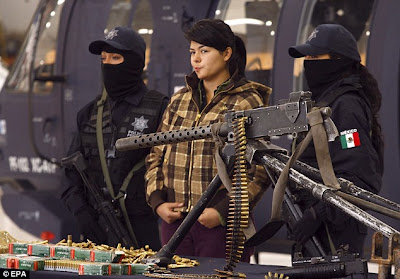 I'll put it bluntly: I defy anyone to show me one gun shop in the US where I can walk in and legally buy a 1919A4 Machine Gun by laying down cash, filling out a yellow sheet and going through the NICS check, and carrying it out. The semi-auto version, sure, because it's not a machine gun; but a real 1919A4? Not a chance, and the gun bigots know it. They just lie.
Posted by Firehand at 06:16

The NYT and PMSNBC are jumping on the bandwagon as usual.

Now they are getting "easily convertible" AR's and AK's from teh us and making machine guns. That's where they are coming from!!

You can buy one without any NICS check if you're a S.O.T. I can show you 3 gun shops local to me where you could be in and out with a NFA weapon in minutes provided you meet the above criteria :-) Would take a bit of preparatory work on your part before you walked in the shops.

I know the media is full of crap but once you jump the hurdles to be a NFA manufacturer and/or dealer, it's easier to transfer them around between dealers than it is for the average citizen in a gun friendly state to buy a single shot 12 gauge at walmart because you've already been previously subject to the full meal deal body cavity and background cheks.

Ok, I'll specify: if you're plain old Joe Citizen, NOT a licensed NFA dealer, you can't just walk in and buy one.

:-) was there on purpose as I know a lot of S.O.T.s. Many more manufacturers than just dealers even. It's a popular gunsmithing sideline around here. 'Tis why one of the local ranges has a weekly machine gun night.

No harm intended, just a bit of levity. Media are always asses when it comes to guns, that's a given.

Oh, interesting thing about 1919s...because of the way the Cali Leg wrote their "assault weapon" ban...semi-auto 1919s aren't covered as they don't meet the legal requirements to be "assault weapons" on a number of cosmetic and functional levels. Magazines are sorta irrelevant to belt-feed people, aren't they?

Same reason they ended up getting the .50BMG improved into the .510DTC by being overly specific in their legislation when they don't know anything about guns. I find this HIGHLY amusing though I wouldn't live in KKKalifornia if my life depended on it, so it's kinda irrelevant to me.