After spending time with some family at the gun show earlier today, I decided to hit the range and try some things out. The shotgun to see if I wanted to go back tomorrow and get some more of a particular ammo; the handloads just to see how they worked.

On shotgun, I had three buckshot loads to test: 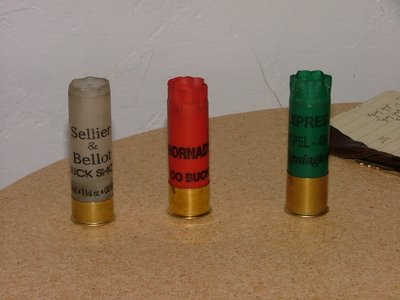 What made me decide this particular test was a post over at the Box '0 Truth on the comparative spread of different loads from the same gun. I'd been keeping the Benelli stuffed with the Remington #4, but had not actually compared it to others. Sighted in, yes; made sure it fed through properly, yes; tested against others, no. So, to the noisemaking.

The range required ten yards minimum range on the shotgun, and their standard rule is 2 seconds between shots. They'll usually not be worried by controlled pairs, but I kept it at 2 when I did my repeat-shots test. So a silhouette was run out to ten- which is about the longest range you can have in my house, front to back- and I fired the TAP first, S&B second, Rem. third. And yeah, real difference. The Hornady loads consistenly put all pellets into a group about 3-4" across, with the wad hitting a few inches away and low. The S&B spread its 12 pellets across an area about 12-14" across. The Remington groups were a little tighter than the S&B but not much.

I like the idea of the #4 load throwing all those pellets, but until I find a load that'll group like the Hornady 00, I'll use the Hornady from now on. The box doesn't say 'reduced recoil', but it felt a bit lighter to me than the others, it shot to point of aim and grouped tighter. And it came back to aim quickly when I fired the last three rapid. Lesson learned? BIG difference in how different brands/types perform out of a given shotgun; actually try different loads in yours to see which would serve you best.

As to the handloads; usually I use a 230-grain cast bullet, but I'd wanted to try a lighter, and finally, after seeing a couple of posts on The High Road, got a Lee mold throwing a 200-grain round-nose flat-point bullet. It's listed for both .45acp and .45 Colt, and has a single lube groove and a crimp groove for .45 Colt use. I cast a bunch, and prepared them the same way I did the 230-grain; sized .450 and lubed with Rooster Red. Rooster because it's a hard, high-temp lube(you have to have a heated size/lube press; I got a heater for Dad's and use it); the bullets are not sticky, and I get less leading than with any of the soft lubes I've tried. I used the crimp groove as another lube groove, and seated the bullets so the case mouth just covered that groove. I started off with the same powder & charge(DISCLAIMER! This load works well in my guns; it may not in yours) of 3.9 grains of Hodgeden Clays.

Results? Good: noticeably lighter recoil, accurate, no feeding problems. Bad: a few stovepipe jams. I'm going to have to up the powder charge a bit.

I think the new bullet will work out quite nicely. And I will try to get by the show tomorrow and get some more of the Hornady buckshot.

Additional:
Thinking about it, depending on your needs/desires, you could find two 'best' rounds for your scattergun: the one with the tightest pattern, and the one with the loosest. Sometimes having a load that spreads fast could be a good thing, though it would cut your effective range considerably.
Posted by Firehand at 18:16