I mentioned this in the post on the Model 8, and here it is 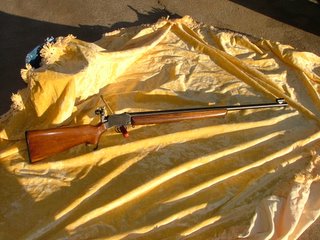 Where the 8 was designed as a 'sporting' rifle, good for both small game and target shooting, the 12/15 was specifically designed as a match rifle. Where the 8 has a 25" barrel, the barrel on this one is 29", and a bit heavier profile, and a much longer, heavier forend. Sights are similar, Parker-Hale match, fully windage and elevation adjustable rear, tunnel front that holds different inserts. 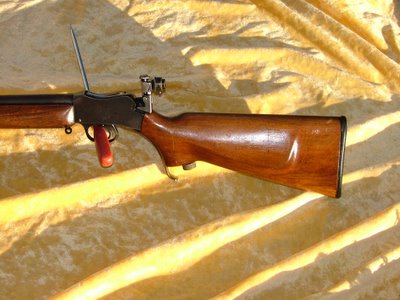 The 8 has a basic stock; the 12/15 has a cheekpiece on the left side. Also, this one was never made as a takedown. 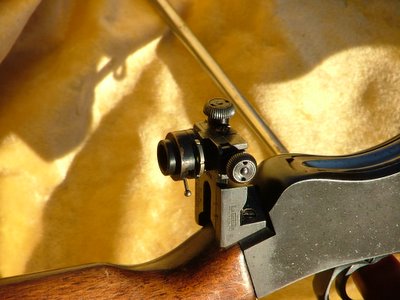 This rear sight came without an eyepiece or insert, but I was able to pick this one up. Originally it had a rubber eyecup that stuck on the rear, and maybe someday I'll find one. Nice thing about this one is the aperture adjustment. See that lever sticking down? There's an iris in the drum, like a camera; slide the lever up or down and the iris opens or closes, so you have adjustment from all-the-way open to a barely-there pinhole. This is also one of the deluxe eyepieces; see that shiny ring at the front? That's a disc holding five different-colored filters, so you can choose from no filter or whatever color gives you the best contrast under current conditions.

The action is identical to the model 8 except for no cocking indicator; as a match rifle it was figured you'd not load until about to fire, so that gets rid of two pieces from the action.

How's it shoot? Better than I would have imagined. It's a bit heavy, but that weight tends to damp movement somewhat so it works nicely for offhand. Though I do try to rest it while reloading. Like the 8, the two best rounds I've found for it are the Federal Lightning and Eley Sport. No, I haven't spent ten or twelve bucks a box for the serious match stuff. Someday if I'm feeling rich I may do so, but for now? From a rest, at 100 yards, it will consistently shoot 1.5" groups, or a little better, with either the Federal or Eley. When I get results like that from 'cheap' ammo(cheap in price only, the quality seems to be very good), I'm not in a big rush to spend ten or fifteen times as much. That being said, remember that .22's can be very picky about what they like best, I just lucked out in getting two that prefer inexpensive stuff.

One of the things you may notice if you find one of the various Martinis is holes in the forend. Sometimes lots of damn holes. You'll notice that both mine have two sling studs in the forend; the 12/15 also has an extra hole a little to the left of center at the rear. As someone put it, some of these look like every damn Brit with a drill liked to move the things around. I saw one picture of a forend the new owner was repairing, and it looked like it'd been run over by a spiked lawn wheel. It had 8 holes spaced along and side to side besides the two he actually used. You'll also find either rails for a handstop or the slot where the rail used to be, sometimes. Happily this doesn't affect shootability of the rifle, so it's just a matter of filling holes and refinishing.

Like I said about the 8, if you get a chance to try one of these out, do. Then you'll probably go searching for one, and happily, they are out there. You can sometimes find one on Guns America or GunBroker, but there are a few dealers that almost always have some. This guy and this guy are two of them- I got mine from the second- and there are others.