Was browsing some various news places, and found a number of things.

Instapundit notes that a bunch of Saddam loyalists are urging Sunnis to vote and warning the terrorists off, and the article he links to includes this: "Zarqawi is an American, Israeli and Iranian agent who is trying to keep our country unstable so that the Sunnis will keep facing occupation," said a Baathist insurgent leader who would give his name only as Abu Abdullah." They've got the American and Israeli bits wrong, but he's definately working with the moolahs in Iran. And they're figuring it out. Now if some of the idiots in the Democrat side of Congress would.

Tim Blair notes riots in Australia that started when some 'middle-Eastern' men hassled people on a beach and beat up some lifeguards. It's now a general mess. Now, there probably is an element of thugs on both sides, but I have to say "what in the hell were the idiots thinking?" when they went to the beach to beat people up. This ain't a number of places; any idiot could have told them that a bunch of Aussies would not take kindly to this(ok, not any idiot; these idiots apparently thought they could get away with it).

Some jerk started trouble on an airplane heading to Hawaii and is now in custody. Says he threatened a baby and 'lunged' at the cockpit. It also notes "Passengers tackled and restrained Tizol when he lunged toward the cockpit." Let's see, 'tackled and restrained', hmmm... is that a polite way of saying 'beat the dog shit out of'? If it's not, it should be.

From the Carnival over at Gullyborg, found a couple of things in particular. One is the takedown at "It comes in pints?" of an e-mail Bitter Bitch got. He makes a couple of points in particular about the way the guy tries to frame the argument to make gun owners look selfish, etc. Kind of thing that needs to be kept in mind when we argue such matters. And Of Arms and the Law has this on the Waco mess:
"I got the ATF reports that showed what the ATF undercover agents in the "undercover house" (across the street from the Davidian place) had done on February 19, nine days before the raid.

Considering this was after ATF had insisted they had to do the raid because Koresh never left the house, etc., we're back to people lying in court in order to cover up a series of serious mistakes(at best). Check it out, along with the other stuff on this site.

The Geek makes a very good remark: "In a truly civil society peopled primarily by enlightened, sober individuals, the carriage of arms might be deemed gratuitous, but it is nonetheless harmless.

In a society that measures up to anything less than that, the option to carry arms is a necessity."

I like it. He also has this marvelous pic: 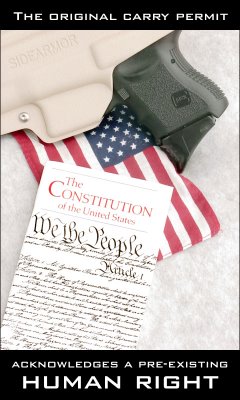 And I'm done for now. My son turns 21 tomorrow, and I have the joys of that to contemplate.
Posted by Firehand at 18:17