If you're not, I am. Well, Steve and Acidman started it.

Shortly after my first divorce(and crap, that still hurts at times to say), I wound up hitting some Renaissance fairs, and it reminded me how much I liked traditional and folk music. So I looked around, and in a wonderful shop called The Irate Musician(sadly, gone now) I found this: 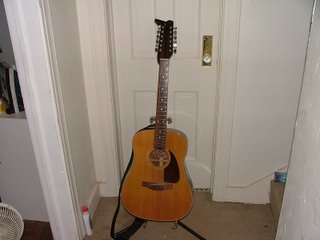 It's a Fender 12-string. I hadn't played a guitar in many years, and it's a bit larger and heavier than a 6-string, but I fell in love with the sound. So there went my 'spare money'. In the years to come I spent I have no idea how many hours with it. I bought some music books, and copied pages from library books, and after I discovered the Internet(shut up) I printed out stuff I found there. And I played, at times until my fingers hurt too much to continue.

Years later I started going to a bar that had an open mike night, and finally tried performing. While there are things I can do in front of a crowd without a second thought, this wasn't one of them. Absolutely bloody awful the first time, marginally better the second, and it got easier after that. A guy I met at another bar(Brian MacFarland down in Norman; handmakes some of the best damn guitars you'll ever see or play) installed a pickup for me(trying to sing and play through one mike don't work too well), and that's the only mod ever done to it. This instrument helped me get through some bad times, and the only place it'll ever go is to one of my kids.

The other is a Tacoma 6-string cutaway: 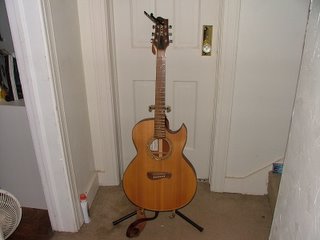 A few years ago I was visiting my folks and hit the music stores in Lawton, and in one found this. If you've never seen one, they've got a very thin body and marvelous sound, and it played very well. On sale, even. For far more than I had. So I went home without it.

About two weeks later I was down in Texas and told some friends about it. Apparently my enthusiasm showed through because Brian asked "Where is it?" Still in the store. "Why?" asked Beverly. Cost. "Uh huh" she said. You'd have to hear her say that to understand.

Two weeks later, on a Saturday, I called Dad and asked him to call the music store and see if they still had it. Turned out the sale was going off that day, and they had one left, and if I was interested they'd hold it- at the sale price- until Monday for me. Uh huh. So I got off work at 9 Monday morning, drove a hundred miles, identified myself to the staff as the idiot who'd relayed a request for them to hold the Tacoma, and they smiled and said "Oh, yes!" and brought it out. And I sat there and played a few minutes, and surrendered. Which in this case means "here's my card, please be gentle". Took her to my folks house to show them what I'd bought(they also fed me lunch), and I've been very happy I spent the money. Apparently just in time, because when I looked at the Tacoma site and other stores, I never saw that model again.

Them's my instruments. I've started practicing regularly again, Fender and Tac alternate evenings, or just the Tac when my hands are bothering me. I'll never give a run to the memory of Stevie Ray, or equal some of the players I've met, but I do love playing them.
Posted by Firehand at 19:38