Today was the first chance I've had in a while to hit the range with no specific testing/objectives in mind, so I loaded up firearms, ammo and targets and headed out. Despite the expected 90+ temps and high humidity. More on that later. On the menu:
M1 Garand 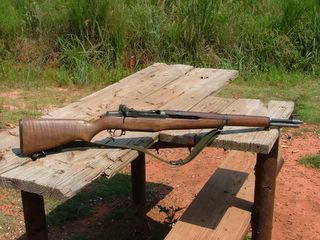 There's been lots of stuff written about this rifle, I'll just cover the basics; semi-auto, fed with 8-round clips pushed into the magazine, .30-06. When I got this one a few years ago the stock was almost black in places with old oil & grease, and dark all over. I gave it the kitty-litter treatment for a week, then sprayed it with a degreaser and rinsed/brushed it to get rid of the litter dust and last of the oil, and oh what a pretty piece of wood it turned out to be! The barrel had been replaced in the '50's from what I could tell and had a salt & pepper bore; I was able to get hold of an apparently unused Danish barrel and had it installed.

I love shooting this rifle, there's just something satisfying about the boom when you fire, though it is a bit distracting at times when the ejected clip lands on your hat brim. Between the weight and the action recoil is nothing to bother about, you know you've fired something serious but it doesn't beat you up. According to the serial number, this one was made late in 1943, so it could have seen duty in WWII and/or Korea; an interesting thing to contemplate as you hold it.

A note on the Garand; you start field-stripping it by pulling the rear of the trigger guard back 'till it unlocks then rotating it down; that unlocks the trigger/floor plate group from the receiver/barrel group, letting you both pull the trigger out and remove the receiver group from the stock. What happens over time is the wood tends to compress a bit where the floorplate bears on it. When that happens it gets easier to take apart, but it also affects accuracy because the groups are not locked into place as solidly as they should be. This one was real easy to take apart, so after the last time I fired it I took one of those 'you have been approved' fake credit cards I keep getting in the mail(I have a whole pile, useful for many things), picked one of the thinnest and cut two shims just long & wide enough to fit where the floorplate/stock meet and fitted them in. Much tighter lockup, and better accuracy. One of these days I may inlet permanent shims into the stock, but with the stock appearing to be WWII made, I hate to mess with it any more than necessary.

Next up, and the rifle I used for the current postal match, is a Yugoslav SKS: 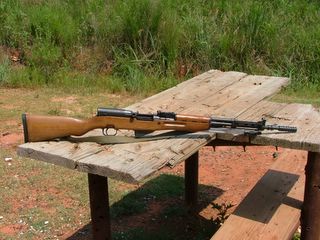 Here it is, ladies and gentlemen, in all its glory, with the eeevilll bayonet and even MORE eeeeviillll grenade launcher. 7.62x39mm cartridge, 10-shot magazine, sturdy and simple. I once told my son that this was designed by a Russian officer who was building it for an army made largely of peasant conscripts who had little or no desire to be in the army and thought a better tool was a bigger hammer. This thing strips for cleaning very quickly, and barring bad ammo is about as reliable as a rock. I've fired several hundred rounds of different brands of ammo through it, ball and commercial soft/hollow points, and it has never coughed. Not once. And accuracy was better than I actually expected. With whatever ammo was on hand and with the very basic sights I get about 3" groups at 100 yards on paper, and I've found that on clay pigeons at that range, as long as I do my part, it will break them pretty much every time. With better sights, or a properly mounted scope... hmmm, new project maybe?

Two things about this model. I've been told that the reason for the weight being a little greater than other SKS versions is the Yugoslavs loaded their ammo a bit hotter than standard, so made the rifles a bit stouter. Anybody know for sure? Also, the grenade launcher, though designed/made in a Commie country, was made to fit NATO spec grenades. Which means that a while back when I found a guy selling some Israeli practice grenades, they fit perfectly. With a standard blank they'll go better than 100 yards; actual launcher blanks are supposed to be more powerful and the flip-up sight is marked up to 240 meters. Actually, I need several of the practice ones, that way I could get several shots before I have to run downrange and pick them up.

The other main object of today's enjoyment was the Martini Model 6: 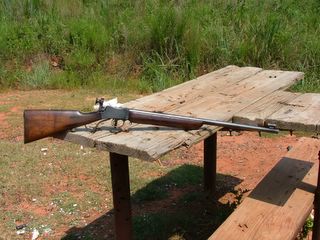 Or maybe the model 12, depending on who you ask. BSA did not stamp the damn things with a model code, and there's no set run of serial numbers to go by. In any case, this is a light sporting/match rifle in .22 long rifle with Parker Hale match sights. This is one of the old school rifles that happily made their way across the Atlantic; idiot socialist schoolmasters and/or government regulations made a lot of schools get rid of the musketry classes, which means the Brit kids don't get to learn to shoot with them anymore and we get to give them good homes.

This one is not as accurate as the model 12 I wrote about before at 100 yards, but it will hold nice tight groups at 50 with a variety of ammo. It's light, handy, and with the right front sight insert I think it'd work quite well for rabbits and squirrel as well as punching paper and blowing up clay pigeons.

One other thing I fired today, a last-minute addition, was the Benelli Nova I bought for BAG day. I remembered I wanted to try it at 50 yards with slugs, so I grabbed it and an assortment of slugs left over from previous tests at 30 yards. I got the best accuracy with three: Winchester Sabot, Speer Lawman and Brenneke low-recoil. The Brenneke hit a bit lower on the target, they and the Speer grouped about 3.5", which from a smoothbore at that range I find quite acceptable. Interesting thing with the Winchester was two of the shots overlapped, with the third almost directly above by about 5"; I'm thinking I pulled this one, so I need to get some more of these to try out.

Second thing about the Benelli is, after Mr. Completely's match a while back, I bought the recoil-absorber rig that fits in the stock, and this was the first time I'd fired it with the new assembly in place. It works. Noticable difference in felt recoil, especially when standing(I went through some 00 buck offhand specifically to try this out). I'd thought about also getting the fancy gel-type recoil pad to go with it, but the damn thing is $80 everywhere I could find it! I'd like to have one, but not that much.

One thing I noticed is that the three-dot ghost ring sights are a: very fast to use and b: tend to make you throw shots high. They do me, anyway. If you sight in carefully using the top of the post, when you snap it up your eye is drawn to the dots(good) which, since the front dot is a bit below the top of the post, causes your shot to go high(not so good). Not horribly so, but it is noticable.

I'm not quoting any special groups today, both because of the fun-day mood and because by the time I was halfway done the heat & humidity was getting to me. 90 degrees with a little breeze is no big deal; 90 with about 60-something percent humidity is miserable, especially with little to no wind. So I was not shooting at my best as the end neared.

I will add one thing. To the people who were there in the previous days, thank you. Thank you for leaving all your crap laying there. Thank you for taking the trouble to haul two computers, a crt, a freakin' power strip, numerous spray cans and a God-cursed kids toy car- the ride-in kind- and a window air conditioner all the way out here just so you could blow it up and then leave all the pieces laying there. Thank you for coming to the place where I taught my kids to shoot and leaving your damn trash all over the place!!! Thank you for making the place look like a bunch of fucking slobs are the only people who use it. I only had one trash bag in the truck, so I filled it and pulled all the big crap I could together so when the rangers come to clean it'll at least be in one spot, but thank you for all your consideration for others and for the fine place to shoot you seem to delight in trashing. Screw you, one and all.

Otherwise, it was a very nice day.
Posted by Firehand at 13:10