Also known as the SMLE, for 'Short Magazine Lee Enfield', short meaning it was shorter than the rifles it replaced. After seeing the take on them from Les Jones in Carnival #20, I thought I'd put in my 2p worth. Here's a shot of mine, with the bayonet it came with: 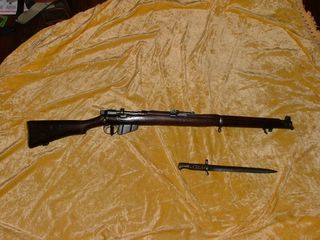 This beast was, as I recall, the first designed for smokeless propellant rifle in British service. The .303 cartridge began in 1888 as a black powder cartridge pushing a 215grain bullet. Along came cordite, giving much greater velocity and less fouling, but they still used a 220grain round-nose bullet. Then in 1910 the adopted a 174grain spitzer bullet at about 2550 feet per second, and with, I think, one change to the bullet it stayed in active service until 1957.

This model of the rifle stayed in production clear through WWII, being produced in Britain and Australia primarily. The later #4 MkI used the same cartridge, the big difference between them being the sights and bayonet attachment design. I believe the woodwork is a bit different between them, also.

Les Jones did a nice rundown on the rifle, and in connection with something he mentioned- the speed of the action- I'll ask you to take a look at the relation of the bolt handle to the trigger. Nice & close, right? Close enough that you could work the bolt handle with thumb and index finger while pulling the trigger with the middle finger. So you could rapid fire while never losing your grip on the bolt. Set a few chargers, five rounds each, close to hand for reloading and practiced troops could fire 20 shots a minute easily; good ones, or someone in a tearing hurry could fire up to 30. Not as accurate as slower fire, but there are recorded cases of German troops in WWI thinking they were under machine gun fire due to the speed and accuracy, when what they were facing was troops with this weapon.

In case you thought that bayonet looked a little odd, here it is closer: 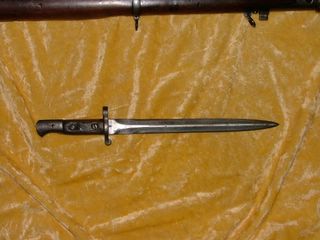 Yes, it is double-edged, from what I've read the last bayonet of that type used by the British. This one is dated 1905, made by Wilkinson.

For some first-hand words about it, I give you George MacDonald Fraser. Interesting guy. Service in Burma in WWII, author of books both fiction and non. Right now, I'm reading his book 'Quartered Safe Out Here', about his time in Burma. Among his recollections is this:
"…the most beautiful firearm ever invented, the famouse short Lee Enfield, either of the old pattern with the flat backsight and long sword bayonet, or the Mark IV with the pig-sticker, a nine-inch spike with no cutting edge. The old pattern, which I carried, was the great rifle of the First World War…
"...and one German general told of how his division had been "shot flat" by its disciplined fire. It held ten rounds with its magazine charged, and another up the spout, had an extreme range of close to a mile, and in capable hands was deadly accurate up to four hundred yards.
"She’s a museum piece now, but I see her still on T.V. newsreels, in the hands of hairy, outlandish men like the Mujahedeen of Afghanistan and capable-looking gentry in North Africa, and I have a feeling that she will be loosing off her ten rounds rapid when the Kalashnikovs and Armalites are forgotten. That’s the old reactionary talking: no doubt Agincourt die-hards said the same of the long bow.
"…but I doubt if the standard of marksmanship is what it was- it can’t be, except at short range- and I wonder what happens if, say, a bridge has to be blown from a distance, because there’s no fuse, and someone has to hit a gun-cotton primer the size of a 10p piece at two hundred yards?(A Sapper lieutenant did that in Burma, with a Lee Enfield, one shot.)"

One thing he mentions that might confuse is 'boiling out' the rifles after use. At that time much of their ammo had corrosive primers, so one thing every British unit would have somewhere was a funnel with a rubber hose; pull the bolt, set the rifle muzzle-down, put the hose in the chamber and pour hot water into the funnel. The water would dissolve and flush out the salt deposits from the priming, and the heat would dry the bore quickly. Pull a couple of dry, then an oiled patch through, and the bore was clean.

All in all, a very nice rifle with a lot of history behind it. Surplus ammo is not as common as it used to be, but new stuff is easy to find, and it's a simple piece to reload for if you choose to. One thing about reloading: the Enfield uses locking lugs at the rear of the bolt, so it's not as rigid as the front-locking Mausers, so the brass tends to stretch more in firing. This makes it well worth buying a neck-sizing die for the cartridge. Standard sizing dies reshape the entire case, which works the brass more and in an Enfield tends to shorten the life of the cases; a neck-sizing die resizes only the neck. Since the body is formed to the chamber of that rifle it's best to only use neck-sized cases in the one firearm, but they'll last much longer. No, I won't tell you my loads, if you choose to roll your own you'll have to check out the manuals for yourself. And, among others, this site has a forum dedicated to the Enfield rifles, good information to be found there.

There's my take on this fine old battle rifle. You can still find it in use as both a hunting and fighting rifle in many places for the three reasons you find any rifle still in steady use after this long; power, accuracy and reliability. If you get the chance, try one out, I don't think you'll regret it(the money you spend buying your own, maybe, but you won't regret having the rifle).

Addition: at one point in this book he is remembering a tight situation involving some deserters and some of his men wanting to shoot them out of hand. He says this:
"If you think that atrocious- well, it is, by civilised lights, but they don't shine, much, in war-time. (They mustn't, or you'll lose.)"
An interesting thought, wouldn't you say?
Posted by Firehand at 19:19

Thanks for such an interesting article here. I was searching for something like that for quite a long time and at last I have found it here.