Black powder cartridges are something of a pain

Specifically, I have a mold for a 500-grain round-nose .45 caliber bullet for .45-70.*  I'd tried a couple of smokeless powder loads, and it shot all over the place.

Tried it with black powder, somewhat better.  This was using a Federal Large Rifle Magnum primer.

Just for the heck of it, tried the same load using the Federal Large Rifle Magnum Match primer, and Shazam!  That shot great! 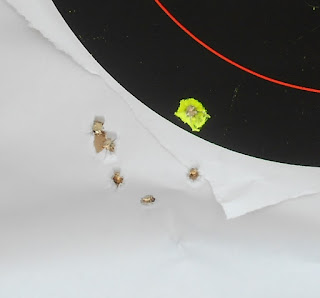 2.5" group at 200 yards.  Second time I've tried this combination and the same accuracy.

That group was loaded in Winchester cases that were minimum length, 2.095".  Next group was with cases at max, 2.105, and they were in more of a pattern than a group.

So the magic combination for this rifle is minimum-length Winchester cases, Federal LRMM primers, 65.0 grains 2f, and that bullet cast of 20-1 and seated so the case mouth just covers the front grease groove and crimps onto the driving band.  Do anything different and accuracy goes to hell.

But this works.  At least until the phase of the moon changes or something.

*picked up used at a show; taken care of, these things will last forever
Posted by Firehand at 19:15