Once upon a time Widener's sent me some ammo, and I told you I'd do some tests.  Due to various things, including me forgetting things*, it's taken a while, but here's the first. 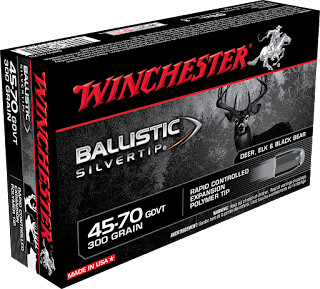 I fired a group of five out of a Pedersoli Sharps a while back; group was definitely 'put meat on the table' for deer or bear at 100 yards, but nothing to write home about.  Which isn't saying bad accuracy for the ammo; I've read a number of people saying that their rifle of that type won't shoot bullets of this weight & length real well.  So for this I had a chance to put a few through a Marlin 1895.  This was at 30 yards on an indoor range, with a caveat: the ventilation system on that lane was causing the target to blow some, so I was having to time my shot with when the damn thing was where it was supposed to be 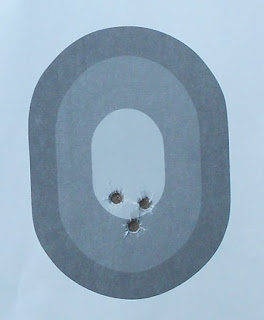 Under the circumstances, not bad at all.  I saved a few for use at longer distance, hopefully with the same rifle, and when I'm finally able to do that I'll add to this.


*As in I did shoot some handgun ammo(Federal .38 Special target), and I can't find the pictures I took; assuming I can, I'll do a post on that .
Posted by Firehand at 06:30

I've wondered about 300 grain ammunition in my T/C Super 16 barrel. The factory barrel twist is 1:20 and I don't know if it will stabilize or not. Cost of that is what scares me a little.

What scares me more is the recoil of that carbine in that short-light barrel. "Its just a push, not a jab". Umm hmm, yeah right. I bought it as a feral hog rifle option - it should do the job handily, as you carry the gun far more than actually shooting it.