Some of the lessons learned from working on an oddball cartridge

Access to a small lathe can be somewhere between 'handy' and 'essential'.

The interwebs is your friend; finding load data and other information without it would be seriously difficult.

Knowing something about casting besides "Melt the lead and pour it in" can make a unsuitable bullet quite suitable.  Speaking of that, I did cast some more of those .32 SWC bullets of 15-1 alloy and we tried them again, also with some other powders.  This is that bullet over 7.0 of 2400 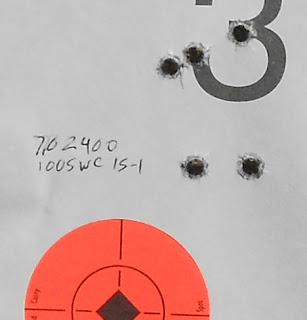 That's at 30 yards from a so-so rest.  Not a bad group, but the real thing is that all holes are nice and round; that bullet of a harder alloy, out of five two of them hit sideways at that distance.  2400 also seems to work well with the 120-grain RCBS bullet 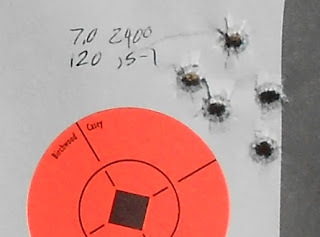 Both of these are going to be tried at longer distance from a solid rest when we can do it.

Also tried a few with W296; one group quite good, the other five very inconsistent.  I think the charges were inconsistent; a couple the recoil and sound was very noticeably lighter, so that will have to be tried again.

On that 'the interwebs is your friend' part, it allowed(among other things) to find this site from Australia which lists what their powders are, what they're named in the US, and has some loads for .310 with two different bullets.  That powder equivalents page is hugely handy when you're reading load information from people in Australia(and despite the best efforts of the hoplophobes and gun bigots, there are still a lot of gunnies down there).