Fine, it's a venomous spider, but this

seems a bit of overkill:
The store in the town of Bexbach was immediately evacuated and the police were called in. A spider expert from a nearby zoo helped a team of 30 people who gingerly searched the shelves, at times switching off the lights to lure the nocturnal beast out of its hiding place.

Disturbingly, they found nothing. On Saturday night, pest controllers decided to solve the problem by spraying the entire 5,000-square meter store with poison. All the perishable food was discarded but the store plans to keep tinned goods, arguing that the pesticide dissipated quickly and wasn't dangerous to humans.

It was due to reopen later on Monday. "Experts believe the spider should be dead," a police spokesman said. They haven't found the body, though. And it can't be ruled out that it left the supermarket and is now roaming Bexbach.

Below, a better shot of one of these: 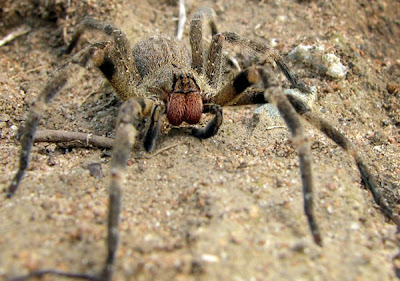 Good thing there wasn't two spiders, they would have had to call in an air strike.
Did it ever occur to any of those Euroweenies to just step on the damn thing?

Or swat it with a banana or something?

I hate it, but it still occurs: if ANYBODY should be able to wipe out a store with insecticides...

Well, if it really is as aggressive as the article claims that should make stepping on it so much easier.

Generally I like spiders, and usually try to get them out without killing them (last time in a arachnophobic friend's house - the critter managed to escape from my hand into my hair and said friend nearly had a fit when I asked whether she could see it somewhere there, but then it got to the front of my shoulder, I cupped a hand over it and it ended safely dropped from the balcony into the grass below - the local spiders are only mildly poisonous at best, I have been handling them my whole life and haven't been bitten once :), but even I would probably swat one that starts threatening me.