Picked something up at the flea market Sunday

an old Sears model 109 metal lathe. 6" throw, 18" bed, and has a 4-jaw chuck. Seems to be in pretty good shape and has all the gears for threading. Which it'll be a while before I try that; very little experience with lathe work. I may have to look for a new chuck in the future; each jaw tightens independently, which makes me think problems getting a piece centered.

Dad has a motor that'll work nicely to power it, and Og has provided some tips. I found some jpg copies of the original manual online, and I'll hit the library to see if have any books on machining that cover some 'how to's' , and order some cutters. I've been wanting a small lathe for stuff for years; back when I was making lots of knives, having this to turn pommels and such would have been bloody wonderful. Right now? Pins, screws(later), punches, and we'll see what else comes up.

I'll post a picture later. In the meantime, anybody know anything to do/watch for on this?


In other news, I have hummers in the yard 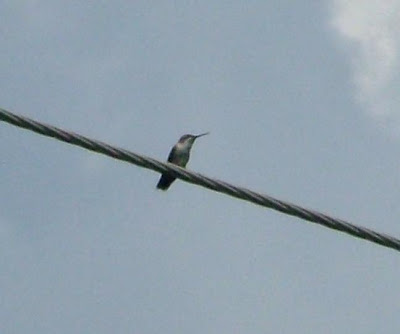 There are two I know of, and this is one of the only good pictures I've been able to get; little buggers zip down to the feeder and by the time I have the camera ready, zip! I feel halfway like Wile E. trying to catch the roadrunner.

Speaking of which, on a training mission a short time ago son & squad were driving down a trail and found a dead coyote, then about a hundred yards down a roadrunner trotting along; and of course someone said "Stupid coyote never learns."
Posted by Firehand at 10:54

That 4-jaw chuck is worth its weight in gold. Centering a workpiece in it is a fundamental skill necessary for lathe work as only in a 4-jaw independant chuck can you center odd shaped pieces. It is actually all you really NEED in a chuck. I learned from an old shipyard machinist who could center a misshapen lump of metal in less than a minute and a piece of round bar in seconds and more accurately than in a 3-jaw. It is a quickly learned skill. By all means get a self centering 3-jaw.

Search Amazon or Lindsay Publications for reprints of "Running An Engine Lathe" and "How to Run A Lathe", both printed to help teach new machinists. Another book you really should have is a copy of "Machinery's Handbook" the machinists Bible. A second hand one is going to be much cheaper than new. New ones are available on CD, but that is a real PIA. The dead tree version is likely over $100 now, but 2nd hand bookstores often have copies for less than $10.00. Age of the copy you find is irrelevant unless you intend to do CNC programming. My copy is over 20 yrs old, cost: $8.50.

You also would do well to develop relationships with Victor Machinery Exchange (This is a wonderful company, an industrial supplier that will happily sell you a dollar's worth or a million dollar's worth of stuff equally cheerfully. Their catalogs are excellent textbooks.), Harbor Freight, and Enco among others. A website you will find useful is Varmint Al's. If you dont have him bookmarked, you're missing out big time if only for his massive linkage.

I'll bet money that your little lathe is nearly untouched and not measurably worn. Most aren't. A motor of more than 1/2 hp and 1725 rpm is overkill.

Centering odd-shaped pieces hadn't occurred to me; that just might be handy...

Thanks for the book recommendations, I'll check them out. Harbor Freight & Enco I know, Victor is a new one for me.

Probably made by Atlas. Which was not a bad thing.

Can't wait to see what else comes up. ;)

One of the first necessary tasks is to determine the thread of the headstock spindle, and it's internal taper. Then you can begin the task of procuring tooling, live and dead centers lathe dogs, and all the other needful things. You'll need to know the internal taper of the tailstock as well. When you have those books and time to go through Varmint Al's website for a while, you'll know what I'm going on about. You're in for a whale of a good time. A lathe is one of the most fun big boy toys you can have. Next is a small milling machine.

Also get yourself a copy of Sparey: "the amateur's lathe"

Take a look on Lathes.co.uk for some web info on the lathe you have.

Practical machinist has a load of really helpful guys in the antique machinery forum, but elsewhere they tend to be a bit anti amateur.

I'll comment a load more when I get time.

Keep us up to date

Gerry, the tailstock has a 0 Morse taper according to what I can find out.

Damn, more sites?!? This is going to take a while. But I think it'll be worth it. And I'll look for that book, too.