In which I return to the fray,

having been otherwise busy the last couple of days. Got several things to scream about, but currently I'll mention my range trip Friday. Had a couple of loads to test, and wanted to do some 'just because' shooting.

The testing was a load for .30-06, tried out in the M1 Garand. I'd wanted a good soft-point load that could be used for hunting and, er, 'social purposes' if needed, and decided to try the 150-grain Seirra Game King bullet over a load of IMR4895. This is about typical of the groups it gave: 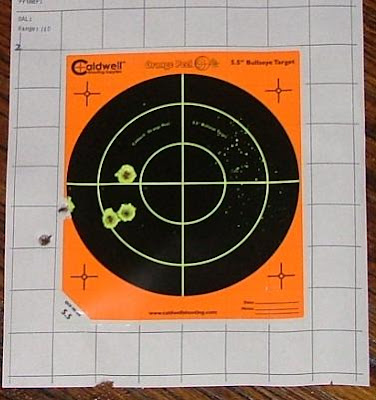 I tend to think the horizontal spread was due to me. For a semi-auto not set up for targets, not bad groups at all. Next time I'll take the 1903 to try it in. So the testing part of the day was successful.

The 'just because' part was trying out some M1 Carbine magazines I'd worked on, and- mostly- hauling the Martini 12/15 out to shoot. Been a while since it'd had an outing, and I'd wanted to try some new ammo in it. But mostly, just wanted to shoot the thing. It's one of those rifles that makes it easy to shoot well.

I'd picked up a box of Eley Practice ammo the week before. It's a mid-grade practice ammo, between the rabbit & squirrel thumpers on the low end and the Tenex match grade at the top. I started out with stuff I knew the performance of, the Eley Sport(ten-shot groups with all): 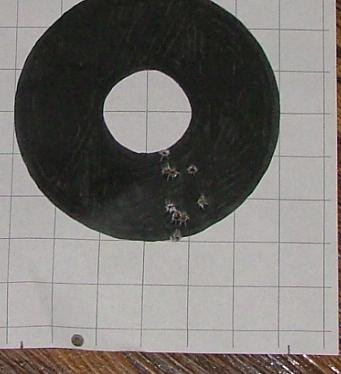 This stuff is about $1.50/box last time I bought, probably closer to $2/box now. I'd class it as practice & critter-thumper ammo, quite consistent.

Then I tried the Eley Practice(please ignore the larger caliber holes): 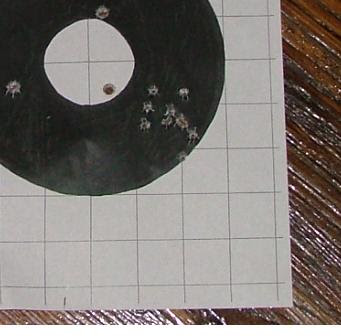 Very close to the Sport in performance, maybe a touch more consistent. It runs $3/box where I got it.

Then, since I had plenty with me, the Federal Champion, now $1.20/box since prices have gone up: 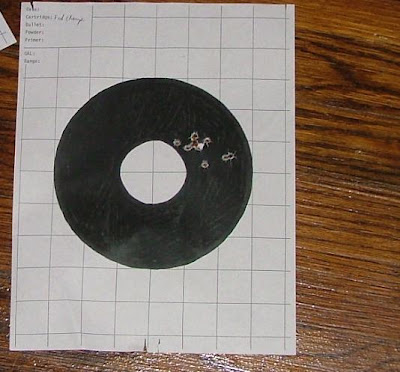 Well, hell, if I want to try for something really better I'm going to have to pony up for some of the actual match grade. Which I've held off on, being cheapfiscally conservative: that stuff runs $12-14/box now. Still, I'll probably pick up a box of Tenex or Lapua Midas one of these days, just to see how much of a difference I can get with it. Of course, if you're shooting matches you get what shoots the very best in your firearm, with as little concern for cost as possible. But for fun shooting, I've been fairly amazed at how consistent and accurate this Federal is in a variety of firearms.

Oh, to add to why I like shooting the Martini so much: all groups were shot at 100 yards from a rest with iron sights. Did I mention I love shooting that rifle?
Posted by Firehand at 06:55