I hate to say this on such a holiday, Updated

but I am freakin' sick to death of these people.

While back it was the GFWs who wanted the rifle taken out of the hands of the Minuteman in MA. Now, it's a bunch of GFWs and 'we don't like the military' types who think a statue honoring a fallen American SEAL is a bad thing- especially anywhere kids will see it- because some neighbors are concerned about the children who will walk by it because Dietz is holding his automatic rifle in the statue. One of the neighbors would not go on camera, but sent an statement saying, "We encourage the community to carefully consider the appropriateness of the proposed location. This has been, and will remain our sole intent."

God, no, can't have that. Can't have a statue of an honest-to-God hero where kids might see it and consider his courage, his devotion to duty; they might come to think of him as a good man, and his actions as a good thing, and that would be flat disgusting, wouldn't it?

And for further roundup of this crap, go here:
"If I've got my 4-year-old at the playground, I feel it would be a threatening image that would frighten her," Fuchs said.

She said the ideal solution would be to place the statue at another location, but Dietz's family disagrees.

Got news for you, you idiot: the only reason your kid would see this as a 'threatening image' is because you taught her not to trust our troops, and taught her to be scared of firearms. If your kid asked about the statue and you said it was to honor a man who died fighting for his country, for her freedom, she wouldn't feel threatened at all; but you wouldn't want her to feel unthreatened by him, would you? Clowns like you are so busy blaming objects for what people do, and trashing our troops whenever possible, you've got to make sure your kids are scared of guns and contemptuous toward those in uniform. Because if they actually consider that there are people out there who'll fight like hell for, and if necessary give their lives for this country, they might think this country is actually worth defending. And that there might actually be good uses for arms. And then where would we be?

A hell of a lot better off, you sorry bitch.

Update: I just cannot stand this shit:
"We're not trying to hit kids over the head with this; we want them to have fun. We also want to bring attention to the fact that our munitions cause a lot of death and destruction to civilians, especially children."

Oh, no, not trying to hit the kids over the head at all.
Lying, sorry sack of dog crap.

At a "teach-in" yesterday at a Northwest Washington community center, Hennessey and others helped the children fashion the fake bombs, using balloons, tennis balls and brightly colored clay. The adults told the children they could write their names on the "bombs" and take them home after Monday's event. And they tried to explain what the concerns were all about.

"In these countries far away from here, kids find them and they look just like toys," said Radia Daoussi, a Vineeta worker, holding up a ball covered in swirls of orange, blue and yellow clay. "If you saw this, wouldn't you want to pick it up and play with it?"

Attention, useful-idiot surrenderpeace activists: cluster bomb submunitions tend to look something like this: 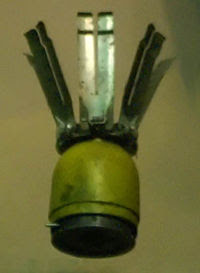 They DO NOT! look like a fucking toy ball. OUR military does NOT do things like make bombs that look like toys so they'll kill or maim children. It was your socialist cohorts the Soviet Union that did that, in Afghanistan for instance.

If I were an atheist, with absolutely no religious beliefs at all, I'd still have to ask the Almighty for forgiveness for having the thoughts I am right now, on such a day as this, about these, people.
Posted by Firehand at 15:59