comes but once a year. I have to admit I picked this up a bit early; I was at Brigadoon Surplus and found this, and I knew this was one of those "If you don't get it now, you won't get it at all" deals. So, thanks to tax refund(and some help from the change jar) I present the Sistema Model 1927 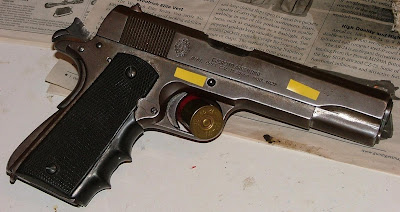 Yes, it looks like a 1911A1; that's because it is(full rundown here). Short version, Argentina contracted with Colt to make 1911A1 pistols(in 1927) and then, in 1945, began producing them in Argentina. With small differences, they're identical to the GI model, and all parts interchange.

At some time in the past a set of wraparound grips were installed(no markings, so not a clue who made them); otherwise, it's as-issued. The crest visible in front of the slide serrations indicates it was a government issue pistol, not one made for the commercial or export market. The finish is best described as 'gone', some very light pitting below the slide on the sides. The bore showed worn rifling and some fine pitting, not unusual for these from what I've heard. They let me field-strip it, and close exam showed no cracks, rust or other 'forget it' findings on the inside. And the price was right, so...

Once home I detail-stripped it, and was very pleased to find no rust, pitting or other trouble on any of the internal parts(lots of old oil/grease/dust), and all were actually in very good condition. Cleaned and lubed, the action works smoothly and the trigger is actually pretty good, breaking clean at about 5 pounds.

Took it to the range a couple of days later and tried it with some S&B ball and handloads, and it functioned perfectly with all. Accuracy wasn't wonderful, part of it may well be the barrel but some of it is the !*)+##% sights being not the easiest things for my eyes to work with.

So, let's see, get a oversize firing pin stop and fit it, probably stick with these grips for now, maybe a new barrel to fit. I'm not sure about the arched mainspring housing, being used to a flat one, but a flat is easy to find if I decide to change it. And, maybe, some new sights; this would be a good carry piece, but for that I'd have to change them to something easier to pick up fast.

So here's my BAG Day acquisition. Hope you found something, too.


Addition: from what I've been reading, the last shipment of these came in about a month or two ago, and I do mean last; as in no more from Argentina.
Posted by Firehand at 18:01