I had a chance to try out a couple of firearms I've never worked with before; I had originally planned to shoot them next week, but as the last couple of days have not gone real well, it got done today(yeah, I know, lousy English). 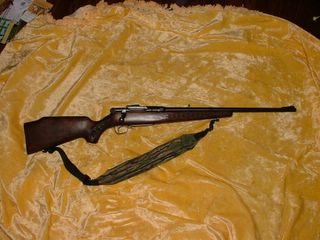 This is a bolt action repeater made, in this case, in .30-30 Winchester. There were very few bolt rifles made in this cartridge, and I'd rarely seen one of these. Barrel is 22 inches, it has a bead front and folding rear with a notch. It's light and handy, it'd work nicely in the woods. Trigger was light, I'd guess about 3-4 lbs, with a little creep.

One of the strange things about this is the magazine. Instead of a staggered-cartridge design it's a straight, like the Mosin Nagant. This one hold three cartridges; any more and the mag would stick out from the receiver bottom. And it's damn near impossible to load it from the top, you have to drop the mag to load. You can load single rounds, but you can't just drop it in and close the bolt, you have to push it into the chamber and then close, and with a flat-nose bullet it can be a bit of a pain.

Good things are, as mentioned, it's light and handy, and since you don't have to worry about a cartridge nose hitting the primer ahead of it in the magazine, you can load it with pointed bullets. What I had today was some cast-bullet loads I made up for practice with a Winchester 94, it's a 150-grain RCBS flatnose bullet with a gas check. If you're not familiar with this, on a gas-check bullet the base is slightly smaller diameter than the rest of the bullet body, and a copper cup is locked on. With lead bullets there are definate limits to how fast you can push them without badly fouling the bore; with a gas check on the base, you can drive them faster without a big mess to clean up. This load, if I remember correctly, drives the bullet about 1500fps, and is fairly accurate in my 94(I've also used this bullet in practice ammo for a .308, it's very versitile). So I tried it out, and got a pleasant surprise; very good accuracy out of this rifle. I'd started off at 50 yards, and then went to 100. My last five shots are below: 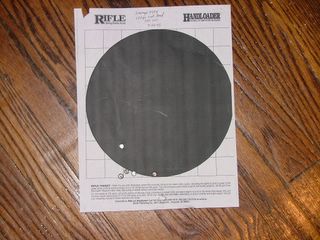 Overall group size is 2 3/8", with three within 3/4". That's accuracy that would put meat on the table at that range, and it's possible that with better sights- or a scope- that overall would tighten up nicely. Overall, it's a good rifle I wouldn't mind having. I've always liked the .30-30, and think a double-barrel in this cartridge would make a fine deer rifle in many areas. Maybe someday, if I win the lottery...

The other to try out is an odd beast, the Nagant Revolver 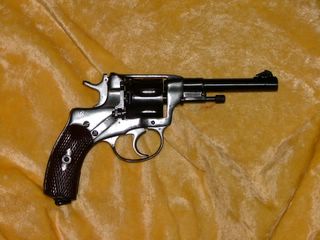 This thing fires a 7.62mm bullet(actual diameter about .311 I think) out of one of the stranger cartridges I've seen: 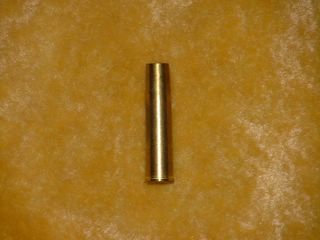 It's 1.5" long, and the bullet is seated way down inside the case(this is some Russian target ammo from SOG). When you cock the hammer, not only does the cylinder rotate, at the end it cams forward so the end of the case actually sits inside the forcing cone. When you fire, the case seals so you have no flash, and no pressure loss, between cylinder and bore. This makes this thing the only revolver I know of that will actually work very well with a silencer.

This one is a double-action, from what I've read they were also made single-action and double-action only. And it has what a friend once described as the 'trigger pull from Hell'. Single-action is not too bad, heavy but it breaks cleanly. Double-action is awful; heavy and it stacks toward the end. Sights are a tapered front post and a notch rear, though there are some target models with adjustable sights on the market.

I shot this one at ten yards, and was pleasantly surprised with the accuracy. Single-action fire gave nice tight groups(this ammo is a hollow-base wadcutter) as long as you could work the heavy trigger. The thing has a heavy V mainspring, and if you had one to work on you might be able to lighten the spring a bit to improve the trigger, but I don't know that for certain, it's just a guess.

Ammo for this is either the Russian stuff shot today($15 for 40 rounds), Fiocci($25 to $30 for 50!) or handload. Starfire now makes brass for this cartridge, and RCBS has dies. Lee makes a die set to load ammo using .32-20 brass; from what I've read it works pretty well. This case isn't long enough to give the gas seal, but it's a lot less expensive than factory ammo and from what I've read, with the right bullet gives good results.

I'd like to have one of these because of the history of them, and the unique action. It's a Belgian design, selected by the Czar's army in Russia, and stayed in use clear through WWII.

Overall a much nicer day than I'd expected it to be when I woke up.
Posted by Firehand at 19:25

Wondrous blog. Your site was very pleasing and I
will go back again! I like surfing the net for blogs
as good as yours.
Please consider looking at my ca california house cleaning blog.