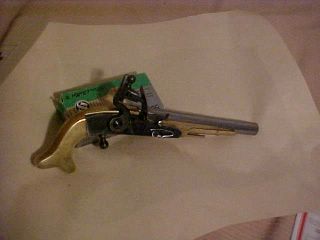 This is a reproduction of the pistol, originally from mid-1700's I believe. It's just shy of a foot long, flintlock, and has a .58 caliber smoothbore barrel. The grip is a hollow brass casting, nicely polished on the outside, and the lock plate is nicely color case-hardened. It's not nearly as heavy as you'd think; that hollow grip & body is pretty light. There are no sights, so it's a 'aim along the barrel & pray' shooter.

When I was first given this, it wouldn't spark at all. A little testing revealed that the frizzen- the piece that the flint strikes sparks from- not only wasn't hardened, it was just mild steel. So I hunted around and found a place that carried Kwik Hard, a case-hardening compound and tried it out. It worked nicely, and sparks abound. As long as the flint is sharp and properly adjusted.

The load recommended is 25 grains of 2f black powder, a .570 diameter ball and a .010 thickness cloth patch. I had powder and some suitable ball and patch material, but I needed fine priming powder, so I 'modified' some 3f(don't ask), and headed for the range.

I lubed the patches with Thompson Center Bore Butter, which worked nicely. However, after the first two shots the ramrod that fits under the barrel was a pain; it's a thin steel rod with a button on one end, and it needed to be a bit thicker and longer. I'll take a longer wood rod with me next time. The balls seated against the powder with no trouble. However, if you were loading this thing and carrying it into battle, I'd hope for a chance to ram the ball down before firing, just in case the jarring of running and fighting caused it to slip a bit out of position. May not be that likely a problem, but I do wonder about it.

If you've never used one of these, first you make sure the barrel is empty, the flash hole is clear, and all excess oil is wiped out, and the frizzen is open. Measure your powder and pour it in. With the barrel vertical, place a patch over the muzzle, place a ball in the center, and push it down with the ramrod until the ball is seated firmly on the powder. With the hammer(or 'cock') at half-cock pour enough priming powder into the pan to fill it about halfway. With it pointed in a safe direction, close the frizzen, cock the hammer, aim and fire. I was pleasantly surprised with the recoil. With that weirdly shaped butt I'd expected it to be nasty, but wasn't bad at all, it was quite easy to shoot. Trigger has some creep- that Scottish lock design is strange- but breaks cleanly.

Accuracy at five yards was about what you'd expect, for two reasons. First, as I mentioned there's no sights. Second, with modern firearms lock time- the time between the trigger actually releasing and the firing pin hitting the primer- is measured in milliseconds; with this the time between trigger release and priming powder firing is a significant portion of a second. Follow-through is very important.

I don't know what the muzzle velocity is, I'd guess about 300-400 fps. It's no .45acp, mind you, but I'd hate to get hit with that big ball at that speed. Add to the bullet damage the fact that they tended to carry bits of patch or clothing and maybe some of the grease used to lube the patch into a wound, and the battlefield back then was a very nasty place.

It's a fun piece to shoot. I think I'm going to make a front sight for it, just a low blade to give more of a reference for aiming, though. And it really makes you appreciate cartridge arms(I'd hate to have to try loading this in a hurry as someone was breaking in). One last thing; if someone gets close and you can't shoot, you can belt them with either end pretty effectively, that brass butt would hurt!
Posted by Firehand at 19:20

I have one but the lock states Main Scott and Deeks. Grnk Greenock? 1777
I have shot it a great many times and it is the 4th of July in your hands.
Anyone know about the info on the Lock?
Cheers,
Raghnall

Greenock sounds familiar, but that's it; and I can't find anything right now. Will see if anyone else knows something.