Here's the rifle I picked up in Tulsa

They made these in a single-shot(Sportsman, I'm guessing), this five-shot that feeds from a box magazine, and the Sportsman-15 that uses a tube mag under the barrel. Fairly basic .22 rifle, 'basic' including no butt pad, just grooves across the butt, with a couple of nice touches.

To start with, take a look at the trigger: 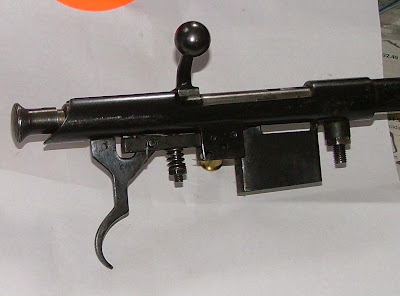 It's a double-lever trigger. That is, the sear and trigger act as two levers: the sear catches the cocking piece and holds it, and the trigger levers the sear down to release. This setup gives a very nice two-stage trigger*. AND it's adjustable. See that spring and nut in front of the trigger? The threaded rod is screwed into the bottom of the receiver and fits through the sear; adjusting the nut up or down increases or decreases the weight needed to release the sear. A very nice design. As a side note, the action is a 'cock on closing' design: instead of the mainspring being compressed when you open the bolt, the sear catches the cocking piece and the spring is compressed when you push the bolt forward to close it, just like the Enfield rifles.

The other thing I really like is the front sight. Instead of the bead most U.S.-made rifles use, this used a blade that give a flat-top post to sight with, which I prefer to a bead. And from the side you can see that the section just below the top is slightly undercut 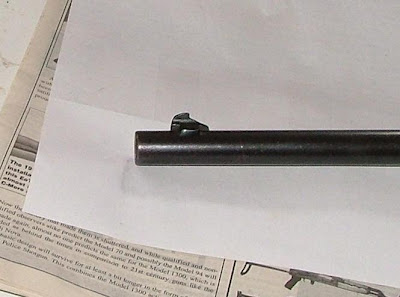 so as to prevent any reflection back toward you when the light is behind or to the side. The rear is a blade with a not-very-deep flat-bottom notch. The receiver- also those of the other two the guy had- is drilled and tapped for a receiver sight, and I suspect most of these wound up with one at some point. Being British, probably a Parker Hale. And yes, I'd like to find one for it.

I mentioned that some troglodyte stole the magazines the guy had for them, so for the time being it's a single shot. I had the chance to hit the range today and try this little beast out, and I like it. Very nice trigger, no misfires or other problems. I think that part of the ejection design on these includes the next round in the magazine- or the follower- pushing the empty up, as all the fired cases pulled out of the chamber and fell down through the mag well before they could hit the ejector.

Since this was an indoor range without a solid bench to rest on and lighting was a touch low, I didn't shoot for groups. I just wanted to make sure everything worked as it should, check sights and try some different ammo. It showed a bit of a preference for Eley Sport, which seems appropriate. When I can get to the outdoor range with a solid bench I'll try different ammo for accuracy and post on it.

Overall, if you run across one of these I'd suggest you grab it if you can. Damn good rifle. Now I just need to find a magazine for mine.


*If you're not familiar with the term, a two-stage trigger is the kind almost always found on older military rifles. You pull the trigger, and it comes to a point and stops: that's the first stage, which- in a good one- takes up much of the pressure needed to fire. The stop is the second stage, the point at which you press a little harder and the gun fires. Since most military arms have somewhat heavy pulls, the first stage could be said to 'partly' pull the trigger, reducing the amount of pressure needed for the second stage to release and fire. For people with wet or cold or muddy hands, not a bad thing. And it was used, may still be, on a lot of target rifles.
Posted by Firehand at 19:07

I managed to come across one of these pretty cheaply down here in Aus, but just like you, some thieving so and so has nicked off with the magazine. Did you manage to find one? I'd really love to turn this one into a sportsman 15 if possible! :)

A friend found one and presented it to me for my birthday this year. I'll dig it out and post a couple of pictures later today. I'll also dig out the address of a guy I found in Britain who generally has one or two; I warn you, not cheap.

I have a spare magazine for a BSA Sportsman 5. It is in perfect working order although the bluing is worn as we might expect. I am happy to sell it to anyone who wants it and I will ship it abroad if you cover my costs. Email me at: charleseshepherd@yahoo.co.uk, if you want to discuss it. I am in Birmingham, England: the home of BSA.

I have just bought my self a Sportsman 15 in Aust for AU$110, with all matching serial numbers and stampings, even the BSA embossing on the stock! Going to take it to the range later to see how it shoots, but not expecting tack-driving quality, the bore while shiny, is getting pretty smooth.
Thanks for the info re the adjustable trigger, this was the most informative page that I have seen yet!

Excellent! Hope it shoots well. I fired a Remington Model 33 once that has visible tool marks in the bore, including across the lands, and it would still- with ammo it liked- shoot sub-1" groups at 50 yards.

Glad the information was helpful

I am in New Zealand and have just been given a Sportsman 15 as my first rifle. it is an heirloom as my Great Uncle bought- I suspect new- in the 1950s. It is in great condition, just a few minor dings on the stock and nice clean bore. Comes with a jade 4x32 scope on a side mount. You guys are helping a lot with info on this old beauty! One question though- the stock seems to be oiled rather than varnished, any idea what BSA used to finish them off? Thanks.

The BSA Sportsman .22s I've seen all appeared to have an oil finish. Might well have been boiled linseed oil; it was a common finish at the time.

Hi will it work on a BSA supersport five??