High Standard made rifles, shotguns and handguns for years, sometimes under their own name and sometimes as store brands or another maker's name. This one a friend picked up a while back. 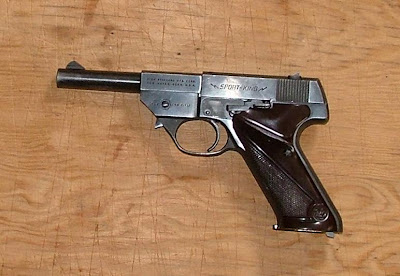 4.5" barrel, ten-round magazine, 22lr. These had a couple of unusual features. For one, this model has no slide lock, so it does not lock back after the last shot. No idea why. Second, see that triangular piece in the front of the trigger guard? That's a spring-loaded barrel lock: pull the slide back a bit, push the lever up and the barrel slides forward off the frame. For cleaning, and for changing: they made barrels in several different lengths for these*. You could use a long 6" for target, the 4.5" for general use and the 2 or 2.5" for easier packing when hiking. I used to know a guy who had one with all three he'd inherited from his father, always thought it was a very nice pistol.

I got to find out how nice the other day when I fired it. This one had turned out to be picky about ammo, most the owner had tried either did not reliably cycle the action far enough to eject empties or gave jams. This one just loves the Remington Golden Bullet ammo, and went through almost a hundred rounds with no problem of any kind. Shot it at ten yards, and it was no problem with a solid hold to keep all shots in a 2" bull. Amazingly, I was able to do that shooting one-handed, and a bullseye shooter I am not. A light, clean trigger definitely helped. A light, fun to shoot, accurate pistol. One more of those "Dammit, why don't they still make these?" guns.


*This one is an early model. Later and other models used a different barrel and lock system, and they are not interchangeable.

As a side note, due to age it's hard to find magazines for these. This one wouldn't feed properly, turned out there are two spring arms that are part of the feed lips that were bent outward just a touch. Owner tightened them in a bit, and the problem disappeared with the ammo it liked. Second, there's a mag that says 'for non-military grip models' that fits ok, but the feed lips are different; the one he tried would not feed reliably with anything.
Posted by Firehand at 11:56