One of the things that gets said a lot about the ammo for the Carbine is that it's weak. And in comparison to the M2 Ball for .30-06 or 8mm Mauser, it certainly is: a 110-grain bullet at 1900fps compared to a 150-grain at about 2900 comes off as Niles Crane standing next to Clint Eastwood.

However, the big thing in the .30 Carbine's favor is short, light & handy. Try putting something like a .30-06 in something that light and you'll fire it once. Twice if you're a masochist. Three times if you're a sado-masochist: you get to hurt yourself and make the people around you cringe at the look on your face. So the usual thought is to buy some softpoint ammo.

I dug around and found softpoints by Winchester, Remington and Federal. All of them run about $35/box of 50(Federal comes in boxes of 20, works out about the same), which is just a bit pricey. So I decided to find some suitable bullets to try. The standard bullet is a 110-grain FMJ. Remington sells their 110-grain softpoint, and Speer sells a 110-grain flat-nose hollowpoint, so I gave those a try. 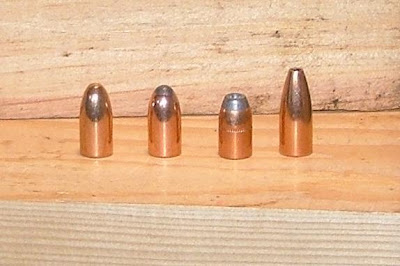 The Remington, with the same powder charge/type as ball gives about equivalent accuracy, but hits a bit to the left. The Speer bullet was very tight at 50 yards, but opened up a bit at 100.* Realistically, either should work quite well in a emergency situation, as repelling boarders at the house or protecting yourself/your group as you get out of Dodge isn't generally done at very long distances. However, on general principles I like to have the best accuracy I can get. So a while back while I was digging through the Midway site I checked for .30-caliber bullets of 110 grains and ran across these: Sierra Varminter, a 110-grain hollowpoint spitzer. A nice, efficient shape with a design that ought to leave a serious mark if you had to use it in a social situation. AND they were on sale, so I got a box.

The one problem with a nice, pointed bullet like this is that in the same weight it's longer than a round-nose. So I took the load I use with ball and the Remington bullets and dropped one full grain, then seated the bullet just a fraction(0.001 by my caliper) below the maximum length the manual shows for the cartridge. The lighter charge because you always work up with a new bullet, and also because it looked like the base of this bullet would sit a bit further into the case. As it works out the base, with the bullet seated at max length, is pretty damn close to the depth of the ball, but I'd rather work up anyway. 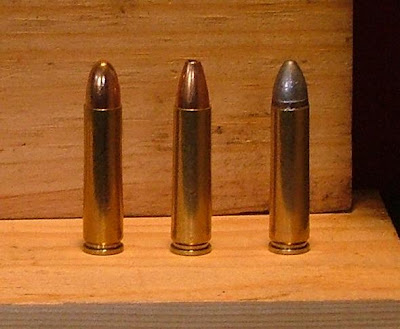 From the left, standard ball, Sierra Varminter, and one of the cast-bullet practice loads I make.

I've put 20 rounds of this load through so far. The first ten were at the indoor range, mostly to see if they'd function properly, to check brass for any signs of excess pressure and to see where it went on paper. They fed flawlessly, no signs of high pressure that I could tell and they hit about the same point of impact as ball. The second ten I was going to shoot over the chronograph the other day(you know, the day I found the dead battery and my spare gone?); if the velocity was over 1900 I figured I'd need to back off on powder just a touch. So I went ahead and shot them for accuracy at 100 yards: identical point of impact as ball and nice grouping. As in a touch under 2" with two five-shot groups. Which is damn good for this little beast, and I'm very happy about it. But I still need to check velocity, so I just loaded ten more for the next trip. I just wish I could set the chrono up at the indoor range I use, it's a lot closer and easier to get to, since if I'm going to the outdoor I plan on spending at least a couple of hours making noise and enlarging my carbon footprint.

Right now I'm about to crash, so tomorrow I'll try to get some pictures of the different bullets posted with this.

I have a few questions

As I was reading this, I did find the sierra-varminter a good combo and a curious example. The .30 carbine is still popular and the cartidge is still in supply (I'm from PH). My question is that: what powder and how many grains should I use for the sierra bullet so that it will function well in the M1/M2 carbine and will it have improvement over the usual round nose at over 200 meters- 300 meters?

What I used with ball was the 'standard' 15.0 grains of W296, which is also the max recommended load.
Let me throw in the standard
DISCLAIMER!!
This worked for me in this rifle; might not be so with another. Start lower, and work up, if you try this.

Dropping one grain gave me 14.0 of W296. When I finally was able to shoot this over the Chrony, it showed a little over 1900fps, identical to military ball, and no visible signs of pressure on the primer or case(and that's not a guaranteed warning of things being hot).

Just to try, I loaded a few with 14.1 grains, and got definite pressure signs on the primer. In my rifle, with this bullet and length, 14.0 grains is the MAX LOAD.

Never have had the chance to try this load at two or three hundred yards, unfortunately. It should give better performance, having the more aerodynamic shape, but that's conjecture, not proven.