Some of you who've been dropping in here might remember that a while back I bought a M1 Carbine receiver when SOG got some in. I've been collecting parts since, and finally put everything together. 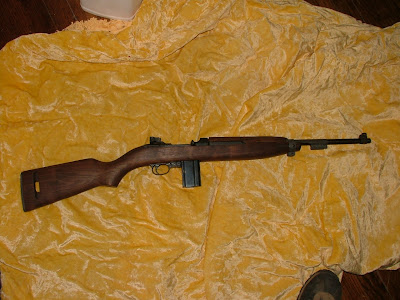 The barrel is an aftermarket(GI barrels in good shape are now at prices that are flat amazing in some cases), the stock- a flat beautiful piece of walnut- was obtained through the good offices of Og. Everything else is GI, from the springs to the sights to the magazine.

Most of the assembly is no big deal, but I'd never installed a barrel before; turned out not to be as bad as I'd feared. Driving the front sight on was an experience of its own(I don't think you actually need the pin to hold it in place), but everything else fitted in just like it should.

Took it to H&H right after I finished it to function-test it, and all went well. It was hitting well below point of aim, the sight blade being deliberately made high. Back home I did some fitting to tighten things up between stock and receiver/barrel, following the suggestions in this piece by the fine people at CMP. Then, after bitching and moaning about the weather and time a short delay, today I had the chance to get it to a 100-yard range and do some shooting and filing. Started off at 50 yards, shot two and filed, shot two and filed until it was a couple of inches low, then moved to 100.

To give you an idea of how much had to be taken off- and the accuracy of this thing- , please note the four shots top left: 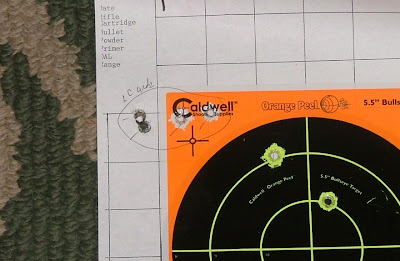 That's a sub-2" group using GI-spec Lake City ball. Just to compare I adjusted windage and fired two rounds of Wolf ball(shut up, Cowboy). As to the elevation, I was actually aiming at the target above this one, so they were hitting about seven inches low. After having cut the front down a bit at fifty yards.

Finally got it just right, as the baby bear said, and it sat there through the rest of the day. Just before packing it in I loaded two rounds and fired them: 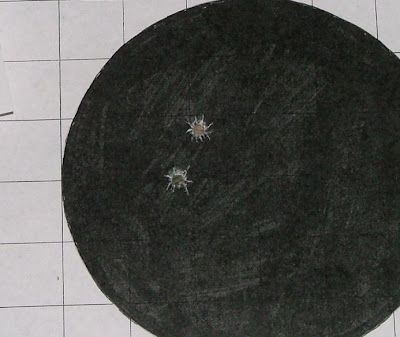