I'd seen these before, and finally got a chance to try one out. The Taurus Tracker in(as K puts it) the manly .45acp: 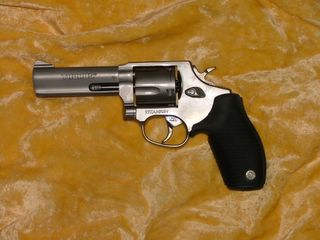 It comes in both stainless steel(usually with a ported barrel) and titanium(without ports). About 9" long and 5" tall, and the titanium version weighs a flat amazing 1.5 lbs. The .45 holds five rounds, using a spring-steel clip to hold them: 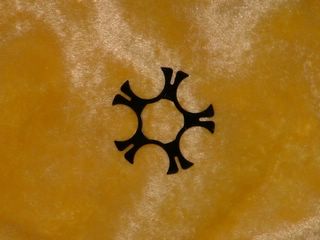 By making it a five-shot, they were able to use a smaller-diameter cylinder and smaller frame, making the stainless job fairly light, and the titanium(which this one is) amazingly so. The titanium guns have a stainless steel sleeve inside the barrel and each chamber in the cylinder that handles the actual contact with hot powder gas and bullets. It's rated to handle +P ammo, so hot loads are no problem for it. Here's a clip with five rounds of Hornady XTP HPs loaded: 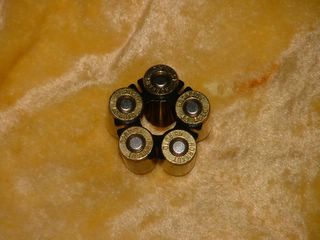 Let me add something here: the pistol is rated to handle +P ammo with no problem, but you will damn well know when you touch them off. The light weight makes this a good carry piece- which is what interested me about it- but, as Heinlein pointed out, there ain't no free lunch. Take away that much weight, and you'll have more recoil getting to your hands. Taurus' answer is that funny-looking grip; it's rubber with large ribs molded in. It fits into your hand quite well and does as good a job of cushioning as is probably possible. You'll notice the recoil, but it doesn't hurt.

The action is very nice. I don't have a scale, I'm guessing double-action pull at about 8 lbs. Single action is marvelous, breaking with no creep or drag and at about 2-2.5lbs. Sights on this one are fixed, on the stainless models I've seen they have the same front post and an adjustable rear.

How does it shoot? This is the first 20 rounds, all fired single-action from ten yards 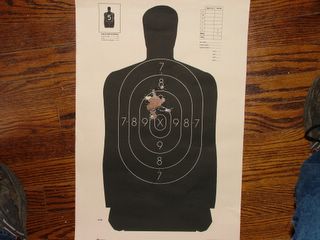 That group is 2.5" across, fired with American Eagle 230gr. ball. For the first time I've ever fired one of these, I think that's pretty damn good, with all shots hitting a touch above point of aim for me. With lighter bullets, say 200 or 185gr, I think the point of impact would be right on point of aim.

I fired the next 30 closer and double-action. Yes, I scattered them a little; I've mostly been shooting semi-autos lately, and had to get my hand back in. No gripes with the pistol. The sharp recoil does lift the piece, but it's not uncontrollable, just a difference between it and a heavier piece. The front sight needs some color to help pick it up faster, though.

Notes
Taurus and S&W are the only people I know of who make a revolver chambered in auto-pistol cartridges. In this one(and I think all others) you can fire the ammo without the clips, but the ejector won't kick the empties out.
The S&W 325PD is built on a Scandium version of their full-size N-frame. It's a good pistol, the weight is not bad at all, but unless you're the size of Bill Jordan(and I'm not) it wouldn't do for a concealed-carry weapon. If you wanted it for open carry while hunting or camping, that's not a problem. And the sights are great; they're using a fiber-optic front that damn near glows in the dark with a V-notch rear, a very fast combination that I like.

Taurus says in the manual that you should not use +P loads with lead bullets in the titanium Tracker. The recoil impulse is sharp enough that if the bullet is not crimped tight into the case, the gun might act as an inertial bullet puller, and the last one or two in a cylinder might shift out enough to tie things up.

Looking at the factory site, it appears that they no longer list this pistol in .45acp, but they do still have it in .41 Magnum! I had a chance to shoot one of those, in the titanium version, and I won't do it again. I'm not recoil-shy, but it kicked the crap out of my hand; full-power .41 Mags are too much for that light a firearm.

Overall, I was impressed. Very light, quite accurate, well-made, smooth action. As a carry piece, whether hiking or in daily wear, it would work quite well. If I could get one with sights like the Smith, I'd practically drool while finding the money. And that's something for me, as I'm still kind of pissed at Taurus for helping NJ with their idiot 'smart gun' project.

Additional: further checking tells me they're making the damn thing in .44 magnum! Jeez, some people are a lot tougher than I...
Posted by Firehand at 19:48