Politicians who deserve removal from office at the very least,

and chiefs of police and officers who, at the least, need some serious retraining.  Assuming they can be trained.

The idea that Pastor Arthur Scott and Temple Baptist Church were causing a coronavirus hotspot by worshiping together over the radio while enclosed in separate cars is not just asinine — it's unthinkable. The fact that Greenville police gave parishioners $500 tickets — even when those tickets were later dropped — is chilling. The only possible spread of the virus during that church service came when the police forced the parishioners to roll down their windows to get ticketed. In the name of protecting citizens from the coronavirus, police not only penalized a completely safe activity but also introduced the only dangerous moment in that worship service.

When police handed out $500 tickets to Christians at Temple Baptist Church, Pastor Scott recalled, "One of the police officers said the mayor wanted to make an example of our church."
Oh yes, examples need to be made.

The 'Let's go straight to hanging' comes from the D&FSofNJ: 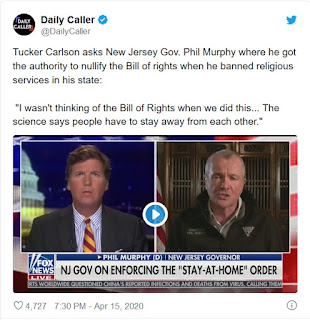 Having prefaced that with

Strikes me as the kind who'd say "I wish that stupid Constitution would stop getting in my way!"

Obummer and company are tops on that list. The entire Kommiecticut congressional delegation should follow right behind.