the 'Socialized Medicine is best!' crowd:
Fuck you.
His father Chris, 32, said: 'Our parental rights have been stripped away. We can't even take our own son home to die. We've been denied that. Our final wish [was] if it all went against us can we take our little boy home to die and we are not allowed.

'They even said no to a hospice.'

The couple, who have previously lost battles in the High Court, Court of Appeal and Supreme Court, claim they also asked doctors to allow them a final weekend with Charlie but say this request has been denied.

'We begged them to give us the weekend,' Ms. Yates said, 'Friends and family wanted to come and see Charlie for the last time. But now there isn't even time for that. Doctors said they would not rush to turn off his ventilator but we are being rushed.

'Not only are we not allowed to take our son to an expert hospital to save his life, we also can't choose how or when our son dies.'
...
As Daniel Greenfield explains, "it would have cost the NHS less to allow his parents to take Charlie to America" but this would have sent the "message that socialized medicine is flawed." It would expose the horrible underbelly of the socialist regime.
Better the kid die than try an experimental treatment the NHS can't or won't do.  Because 'fairness and compassion', or something.

Many reasons I'm damned glad those people risked all to break away from Britain.  This is among them. 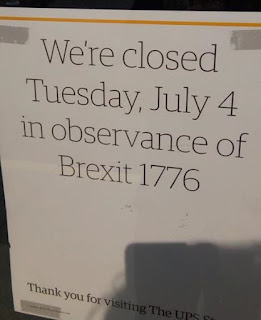