Ever since Jeff Cooper started the scout rifle noise, you've been able to go to any gunboard and write "What do you think of this?" and start a fight. Responses will range from "Greatest thing ever!" to "Idiotic idea".

I'm in the middle. Not the best of all worlds, but it definately has its uses. A red-dot is very nice, but at a distance some magnification can be good, and I think, despite what Kim says, a low-power scope out front on a .30-30 is a wonderful idea for hunting.

While back had a chance to shoot a M1 Carbine, and- despite expectations- fell in love with the damn thing. And had a chance to buy one a while later, and grabbed it(seeing what prices have done lately, I'm damn glad I did). So I've got a batch of ball ammo for it, and I've been enjoying shooting it, and I had the thought this would be a fine rifle for the scout-mount concept. You could use the same mount for either a scope or red-dot depending on which suits you.

Looking around I found Sportsmans's Guide has this Carbine Tactical Tri-Rail Forearm Mount,
which replaces the handguard and clamps directly to the barrel. That was the only one I saw; it would do, but a: I don't need the tri-rail setup, just wanted one on top and b: being cheap I didn't want to spend that much without knowing if I'd like it. So, the experiment.

At the gun show over the weekend I found an old carbine handguard. Took a piece of walnut(it's hard, and I had a scrap piece) and rounded one side to match the groove in the handguard top, then sanded it so the top would be level. I had a short piece of scope base, so put this guard on the rifle and marked the centerline, then took it off and drilled two mounting holes. Screwed the base on, stuck on a scope I had on a .22 pistol with some rings I'd picked up a while back(nice to have spares), and here 'tis: 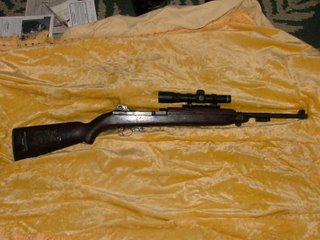 It sits a bit high; lower rings would make a big difference there. And there's the possibility the mount being on the handguard as opposed to the barrel may not be as solid as I'd need, it only taking a tiny bit of shifting to make a big difference. However, this is not a 200-300 yard rifle, it a 150 at most(no matter what the sight says). In any case, it's a good testbed for this. If I really like it, I can do things to sit it lower or lock it a bit more solidly, or if the concept is good but I need a mount on the barrel, I can get one of the units from SG, idiot side rails and all.

Times like this I wish I had some machinist training and access to a milling machine, I could make a base that locked solidly to the barrel and mounted the scope nice and low. Maybe later, for now I'll have to see how this works.
Posted by Firehand at 08:55